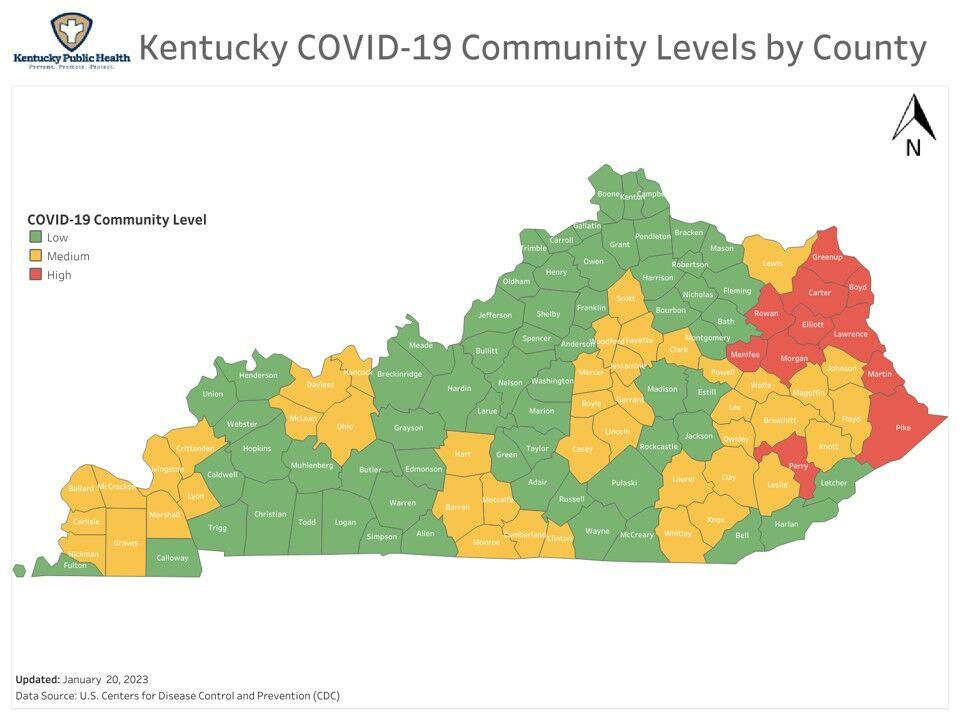 There was plenty of encouraging news in the weekly COVID-19 report issued on Monday, as the number of new cases, hospitalizations, deaths, and Kentucky’s positivity rate all saw significant declines during the last seven days.

The Kentucky Department for Public Health January 23 report says there were 4,913 new cases during the past week. This is down significantly from the 7,559 during the previous seven days, and 6,208 two weeks ago.  880 new cases were reported in those 18 and younger, compared to 1,085 a week earlier.

There have now been 1,685,679 confirmed cases of confirmed COVID-19 cases in Kentucky, since the first one was reported in Harrison County during March 2020.

Four counties had at least 100 new cases over the past seven days. Jefferson had 613, Fayette 353, Warren 181, and Hardin 107.  A week ago, there were five counties over the century mark for new cases, and the week before that it was six.

It should be noted that the number of positive cases is likely undercounted, since many people who have a positive result from a home test do not report it to state public health officials, if they do not require medical treatment or were asymptomatic.

Kentucky’s positivity rate, based on the number of positive tests other than those from unreported home kits, has fallen for the third consecutive week. It currently stands at 10.27%, down 0.1% from a week ago and a sizeable drop from the 11.78% posted two weeks ago.

Forty-five new COVID-related deaths appear in the latest report. That is down from the 59 deaths a week ago.  The pandemic total in Kentucky now stands at 17,838.

There was also a big improvement in the weekly COVID Community Levels map that was released by the Centers for Disease Control and Prevention and issued by the Kentucky Department for Public Health on Monday, and accompanies this story.

The CDC breaks the state down by county based on whether they have a high, medium or low level of COVID, which are shown on their maps as either red, yellow, or green, respectively.

For more details on Kentucky’s response to the COVID-19 pandemic, community levels based on CDC determinations and more, go to the state’s website, http://kycovid19.ky.gov/.