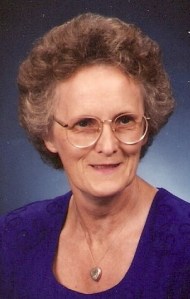 June Maureen Wilson Amburgy, 83, of Pineville, Kentucky, passed away on January 19, 2023, with her family by her side.
She was born on July 10, 1939, in King’s Lynn, Norfolk, England, where she later met her husband, Marvin Amburgy.  He was serving in the Air Force at Royal Air Force Station Sculthorpe, England.
They were married at St. Nicholas Chapel, King’s Lynn, on June 29, 1957, and spent more than sixty-five years building their family together.
June was a multi-talented homemaker and spent much of her life babysitting for children in her home.  These children were all very special to her and gave her much joy over the years.  June also dedicated much of her life to her grandchildren and great-grandchildren.  They loved to swim each summer in Granny and Pap’s pool, and she enjoyed hours watching them.  Finally, June devoted over 30 years to the children in the nursery at First Baptist Church where she was a member.
June was preceded in death by her parents, Albert E. and Dorothy M. Wilson; brother, Mike Wilson; special cousin, John Hardy; and in-laws, Lawrence and Artie Amburgy.
She is survived by her loving husband, Marvin Amburgy of Pineville; son, Richard (Dena) Amburgy of Mt. Sterling; daughters, Karen (Kip) Jeffrey and Linda (Scott) Jeffrey of Pineville; grandchildren, Ian (Jennifer) Amburgy, Amanda (Tyrone) Henson, Joshua (Caitlin) Jeffrey, Wilson (Megan) Jeffrey, Jared (Corey) Jeffrey, and Seth (Devin) Jeffrey; great-grandchildren, nieces, nephews, sisters-in-law, brothers-in-law, and a host of friends.
Services will be held at First Baptist Church, Pineville on Tuesday, January 24, 2023.  Visitation will be from 11:00 AM to 2:00 PM.  Memorial Service will begin at 2:00 PM with Reverend Ron Howard and Reverend Paul Anglin presiding.  Burial will take place immediately following at Green Hills Memorial Gardens, Middlesboro, Kentucky.  Pallbearers will be her grandchildren.
In lieu of flowers, donations can be made in her honor to First Baptist Church Nursery Remodel Fund, 405 W. Kentucky Avenue, Pineville, Kentucky 40977.
Arnett & Steele Funeral Home and Cremation Center in Pineville is honored to serve the Amburgy Family. Light a candle of remembrance and sign the guest register at www.arnettsteele.com.