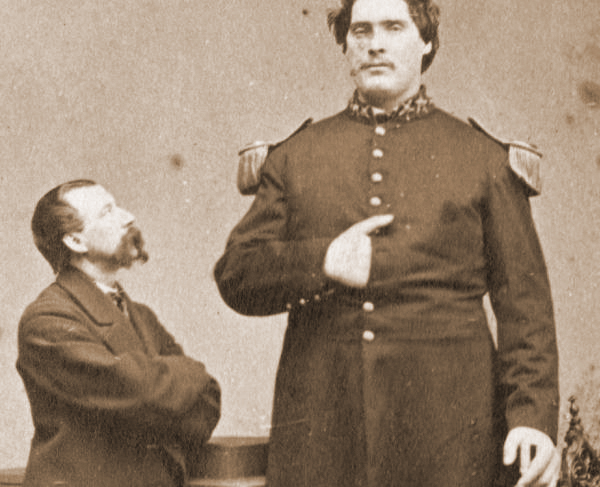 Martin Van Buren Bates was born in the small coal-mining community of Kona near Whitesburg in Letcher County, Kentucky in 1837. His mother’s pregnancy and the early years of young Martin were normal, not unlike that of other youngsters in the Letcher County area.

This changed after his schooling began and he began growing. Initially his parents were pleased that he appeared larger than other children his age but his growing continued. Soon his height and weight surpassed that of his mother. His teacher at school was also surprised that he was growing “head and shoulders” quicker than his classmates.

His abnormal size became a concern for his parents and they became afraid for his mortality. They tried to limit his activities but eventually he became so large, robust and incredibly strong that they relented and gave him full rein of his activities.

He was over 6 feet 6 inches tall and weighed 300 pounds by age 13 and had outgrown his bed. He and his father made a larger bed befitting his size and also altered the height of the doors after he bumped his head leaving pump-knots.

Martin would continue growing alternately in height and weight until age 28.

He was very intelligent and if he had lived in our day and time he would likely be an honor student. He obtained a teacher’s certificate and was hired as a school teacher while still a teenager. His students loved having him as their teacher in their one-room log cabin school near his home. “His voice rumbled like a bellowing bull,” That reminds me of Andre the Giant of entertainment wrestling fame.

Martin Van Buren Bates volunteered to fight for the Confederacy during the Civil War signing up for a 12 month stint in the Fifth Kentucky infantry in Whitesburg as a private. After the first year he joined Company A of French’s Battalion of Virginia as a first lieutenant. He was said to be seven feet seven 1/2 inches tall upon entry into the service and weighed 328 pounds.

He was involved in several skirmishes in Kentucky and Tennessee, earning a battlefield promotion to captain. He was seriously wounded in a battle at Cumberland Gap leading to his capture by the Union forces. His reputation grew with the Yankees too as they referred to him as “the Confederate giant who was as big as five men and fights like fifty.”

Martin visited his home near Whitesburg, KY in 1863, and found his family gone and learned that his brother James had been tortured and slain. He wreaked vengeance on the culprits but was captured by Union forces in eastern Kentucky.

The Yankees took delight in having the giant as a prisoner and transported him by a series of mules with “his feet a-draggin’ and a rope around his neck.” After one of the animals gave out and lay down under his massive weight, they would place Martin on another. Eventually he was put aboard a boat and taken to Camp Chase, a prisoner of war camp in Ohio. Later he was transferred to Point Lookout, Maryland where he was involved in a prisoner exchange. He proved to be a most interesting individual wherever he was seen.

Martin was mustered out of the service in Knoxville, TN following the war in 1865 and returned to his east Kentucky home. There was much resentment in the area following the war as many families maintained their allegiance to one side or the

other. Some hid along the mountain paths and took potshots at the veterans that supported the opposing side during the war. Perhaps the Yankee sympathizers didn’t shoot at Bates because he was such an oddity and likeable individual. With his size he certainly was a large target.

Bates wanted nothing to do with this sniping, commonly called bushwhacking in the years following the war. He and his nephew “Bad John” Wright went to Cincinnati where Martin joined the circus traveling throughout the United States and Canada. He was normal in every respect except for his size, standing a fraction under eight feet tall and weighing 525 pounds.

In March 1867 he was returning home to Letcher County, Kentucky when he was forced to stop in Louisa because of swollen streams and rivers making further travel impossible. He had passed through Louisa previously while a prisoner during the war. This time he checked into the town hotel and his presence attracted a lot of attention.

The next day while Bates was sitting in a hotel room a local man took a pencil and marked the outline of his huge boot on the wall, a drawing that remained for many years for all to see. It was jokingly reported that his boots would hold a half bushel of shelled corn.

Bates remained in Louisa for nearly a week and made several visits to the Masonic Academy while he was there. He also called on a girl who was nearly six feet tall yet she could stand erect under his outstretched arms. Copyright 2022 Jadon Gibson

Editor’s note: Jadon Gibson is an Appalachian writer from Harrogate, Tennessee. His stories are both historical and nostalgic in nature. Thanks to Lincoln Memorial University, Alice Lloyd College and the Museum of Appalachia for their assistance. 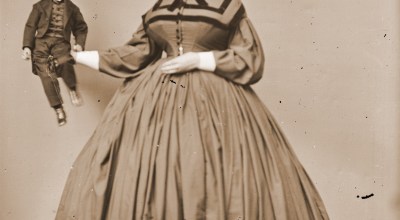