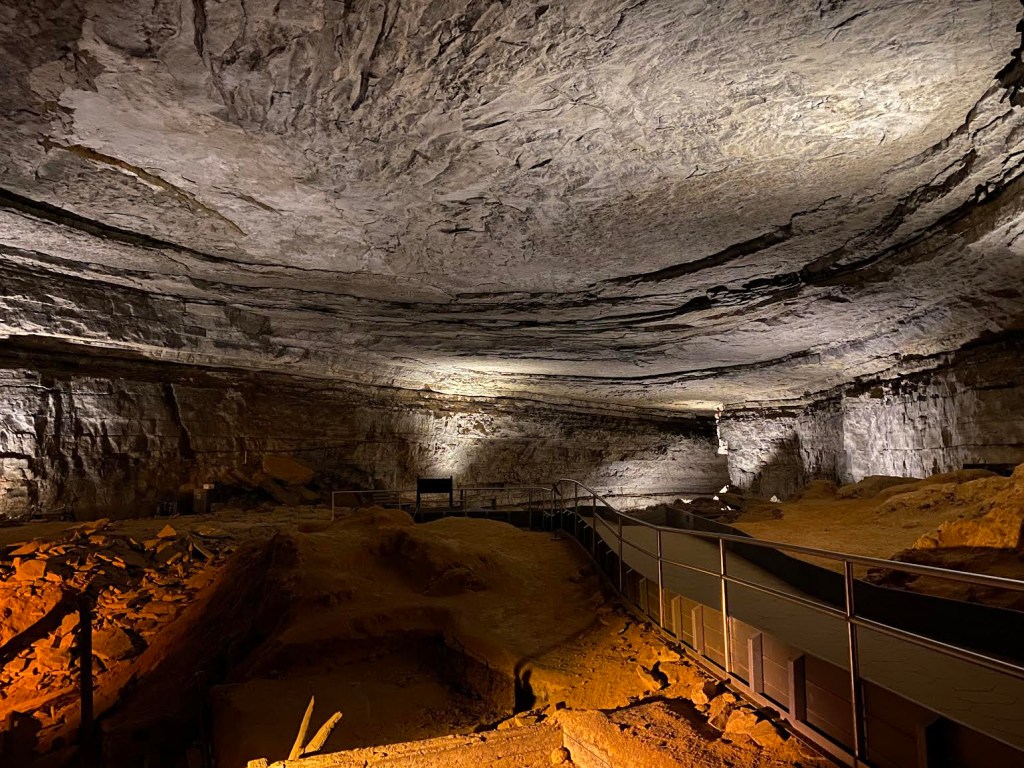 Mammoth Cave is a marvelous attraction in Kentucky for natives and non-natives alike. Photo by Gillian Stawiszynski

Beyond the bourbon, horse racing, creeks and bluegrass music is my new favorite part of Kentucky: Mammoth Cave.

In a competition for the longest cave system in the world, Kentucky bests beautiful countries like China, Malaysia, Spain and Switzerland.

At 400 miles, with possibly 200 more undiscovered miles, Mammoth Cave is the longest cave system in the world. And we have the privilege of being a short road trip away from its home near Brownsville.

I’ve lived in this state since 2017, and although I’ve been to the Red River Gorge and Raven Run countless times, I had never taken the time to travel to the state’s natural ground void. I’ve enjoyed an underground boat ride in a 100-year-old flooded mine near the Gorge, but it’s not comparable.

Walking down the manufactured steps into the dim cavern felt like being catapulted into outer space. The tour guides told the group that bats were living in the cool, damp halls, but it was hard to believe that anything could live in that environment. (Sorry, troglobites, I know you’re pretty unique).

Besides its wildlife, the cave’s rich history is its most crucial feature.

According to the National Park Service website, The original explorers of Mammoth Cave were people indigenous to the southeast woodland region, which includes Kentucky. Prehistoric people explored the cave about 6,000 to 5,000 years ago.

Indigenous people of these nations explored at least 19 miles of the upper three levels of the caves.

Imagine that: you’ve got to mine for precious resources and bury your dead in pitch-black caverns more massive than any structure you’ve explored before. For light, you don’t have a covered candle, but you may have a torch. Just be sure you don’t wave it around too much and lose the flame. However, unlike the area’s indigenous peoples, you don’t have the ancestral knowledge of the prehistoric people who explored those caves. You don’t have that connection with the land or the Earth’s interior, for that matter.

Without the uncredited hard labor of enslaved Black Americans, the struggle I just described would likely be my experience in Mammoth Cave. Except- I wouldn’t give the cave a chance. I don’t do well in the dark.

In the early 1800s, saltpetre was highly valuable. As one of the main ingredients of black gunpowder, it became even more valuable during the War of 1812. The dirt floor of Mammoth cave was full of it.

To the beneficiaries of saltpetre mining, using enslaved workers was the only way to garner even more profit. Like all enslavers, they thought: “How can I make my pockets the heaviest they can be while doing almost nothing?” Sound familiar?

This mining was laborious, back-breaking work, and enslaved people were forced to work at least 12 hours a day. Nevertheless, these men built some of the first passageways in the cave. They are the reason that these passageways were able to be paved and easily traversed today.

After the war, saltpetre quickly lost value. But ultra-wealthy enslavers found another way to exploit Black Americans they had enslaved- using them as tour guides. Enslaved individuals like Materson and Nick Bransford, Alfred Croghan and Stephen Bishop were some of the first tour guides. They didn’t have modern-day equipment or the cave electricity paid tour guides can use today, but they still led hour-long adventures. These men did much of the exploration of the cave and are the reason we can enjoy tours like a walk in the park.

Kentucky is a beautiful state, and I find more to love every day, especially in its nature. But let’s remember its roots.

This column centers on the opinions and experiences of a Kentucky transplant from Orlando, Florida. Gillian Stawiszynski comes from a land known for the “Florida Man”, its plentiful alligators and Disney’s swamplands. She experienced culture shock when she moved to Kentucky, a state that strangely has a more southern culture (and ice storms) than her lizard-clad home. Although she misses salamanders, beach air and Publix’s Arroz con Leche, she has spent the past five years engulfed in Kentucky’s beauty and intrigue.