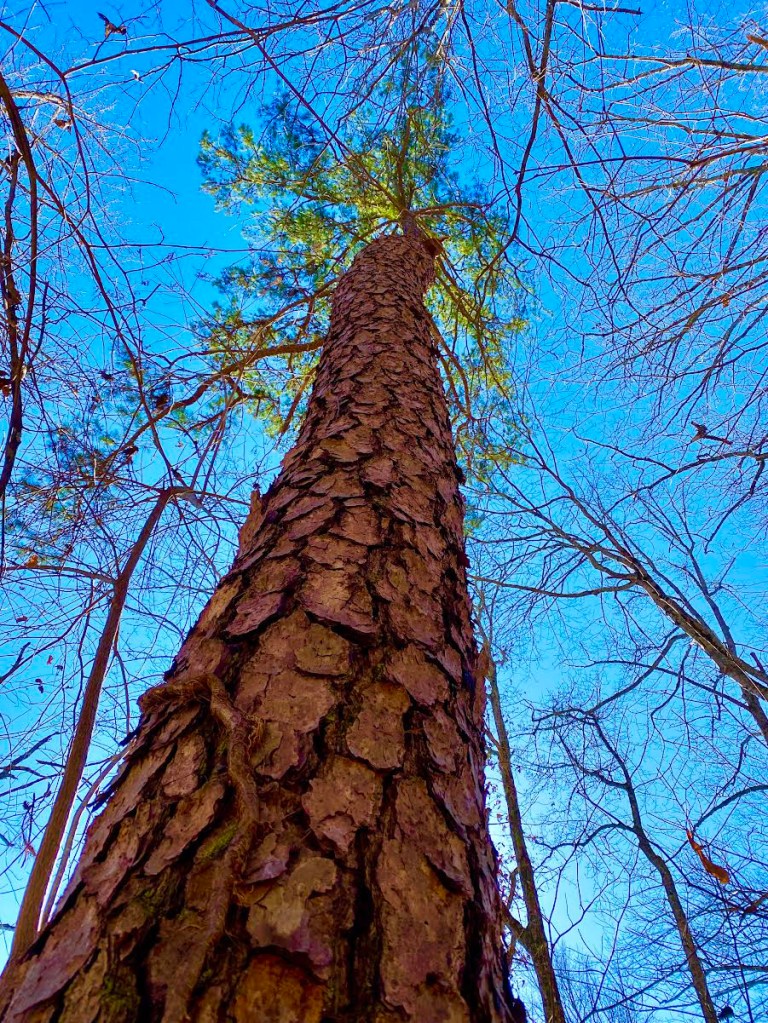 Teh shortleaf pine is common locally and easily recognizable by its long, majestic trunk and overall absence of limbs. Photo by Steve Roark

Shortleaf pine (Pinus echinata) is my favorite of the pines. It is a beautiful tree to behold with its long straight trunk of map-patterned bark. It and Virginia pine are the most common pines found in our area, and can be found in almost any woodland hike. They are easy to tell apart just by looking at the trunk. Shortleaf usually has few limbs, whereas Virginia is very limby and often has dead stubs sticking out. Also, Virginia tends to hang on to its old pine cones, so they will appear numerous in the tree. Another commonly used name for shortleaf is yellow pine.

Shortleaf is usually found on dry sites such as south slopes and ridge tops. It can form pure stands, or be mixed with Virginia pine or with hardwoods, especially oaks. As mentioned, the bark is the easiest way to identify older trees. The tree usually has a small crown of needles with a long, straight, limb free trunk. The reddish-brown bark forms large, flat plates that really stand out in a forest. The plates often have small resin pockets that look like tiny moon craters. The needles come in bunches (called fascicles) of two, with occasional threes. They average 2-4 inches in length, and form in upturned clumps on the branches. The shortleaf cone is small (1½-2½ inches long) and egg shaped. Virginia also has needles in twos, but they are shorter, thicker, and have a yellowish tinge to them. The cone is bigger and more round than shortleaf cones.

Pines are considered “softwoods”, but shortleaf wood is actually quite hard. It is used for general construction, pulpwood, furniture cores, and flooring. Back in the day, splits of the resinous heartwood were used for fire starter, and was termed “fatwood”. The seeds of shortleaf pine are eaten by birds and small mammals. Squirrels will cut the maturing cones before they open to get at the seeds. Small stands of shortleaf in a hardwood forest offer good shelter for mammal from wind and rain.

The shortleaf pine population has been in pretty drastic decline over the last 30 years due to pine beetle outbreaks and also because shortleaf has not been able to replace itself due to competition with other tree species. Historically, fire in forests was more common and acted as an equalizer, killing back competing hardwoods while allowing fire tolerant shortleaf seedlings gain a toe hold. Open mixed stands of oak and shortleaf pine were common 100 years or more ago, and were valued for providing habitat for quail and other bird species. There is movement afoot called the Shortleaf Pine Initiative to try and bring shortleaf back to some of its former range. If you’re interested check out http://shortleafpine.org/or just do a search for Shortleaf Pine Initiative. It you have some land, consider planting some. Check in with your local state forestry office for guidance.