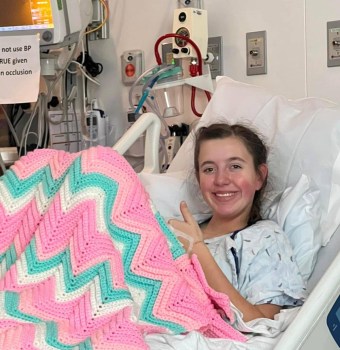 Shelby Vaught during her recent trip to the Children’s Hospital of Philadelphia. Photo submitted 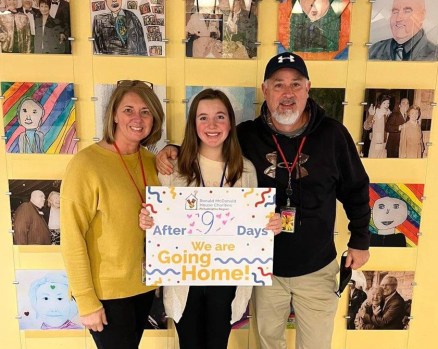 Shelby Vaughn, center, with her parents Charlotte and Danny at the Ronald McDonald House at the Children’s Hospital of Philadelphia. Photo submitted

One local girl has been in the hearts of many for the past few weeks, as she underwent heart surgery at Children’s Hospital of Philadelphia.

Shelby Vaughn, 16, has a rare heart condition known as coarctation of the aorta, a condition seen in about 2,000 babies per year in the U.S.

Coarctation of the aorta is a congenital birth defect in which a part of the aorta is more narrow than normal. According to the Mayo Clinic, the defect often is not detected until adulthood. Cases can range from mild to severe, the latter of which could require surgery in children. Although it is treatable, coarctation of the aorta usually requires lifelong care and follow up. If the narrowing is severe enough and if it is not diagnosed, the baby may have serious problems and may need surgery or other procedures soon after birth.

In a 2019 study, using 2010-2014 data from 39 population-based birth defects surveillance programs, the Centers for Disease Control and Prevention estimated that about 2,200 babies are born each year in the United States with coarctation of the aorta.

“At birth, she didn’t have blood flow to her kidneys and lower extremities,” said Charlotte Vaughn, Shelby’s mother.

Charlotte Vaughn recalls the early days that Shelby was in the hospital after being diagnosed, and she credits a premature birth with saving her daughter’s life.

Shelby was born with a heart defect known as Tetralogy of Fallot, a rare condition caused by a combination of four heart defects that are present at birth. All of which occurred in the two weeks prior to her birth, her mother said.

Unfortunately, Shelby’s struggles do not end there. Shelby also had extra veins, because her body was trying to compensate for the lack of blood flow because of the obstruction in her aorta. Of the carotid arteries located in the neck, Shelby is missing the one on the right side. Because of these birth defects, Shelby spent many of her first days at Children’s Hospital of Philadelphia. With heart defects as rare as hers, very few hospitals were equipped to handle Shelby’s case, and the doctors at the University of Tennessee sent her to Philadelphia.

“They flew her and my husband out the next day, after she was born,” said Vaughn.

“I was about a week later getting up there, because I had a C-section and they wouldn’t release me to fly right away. It was very heartbreaking and traumatic, with all the worry that goes through your head.”

According to Shelby’s doctors, her surgically implanted valve, or conduits, were meant to last her through her childhood, and since Shelby had recently gone through a growth spurt, she was in fact due for a change. Danny and Charlotte say it was all a matter of when she would need to have the conduit changed to an adult size.

“She outgrew the piece she had at birth, and that’s why we had to travel back,” Charlotte Vaughn said. “She’s 16 now, so the first piece was a miracle compared to what they thought, which was around 7 and 9 years old to have the piece enlarged.”

At regular check-ups at Children’s Hospital, doctors would ask Shelby questions about how she was doing in school, her friends and what activities she participated in, all to get a gauge on Shelby’s health. Shelby’s doctors at Children’s eventually allowed her to set her own limitations for herself.

“With the annual check ups at Children’s every year it was just like holding your breath,” Charlotte Vaughn said. “I don’t think she realized that she felt bad.”

When Shelby had outgrown the conduit, her blood pressure had started rising on her left side to compensate for her aorta being transversed. Within a year, Shelby would require surgery.

“It’s difficult to schedule your own daughter’s surgery,” Charlotte Vaughn said. “When they called back and said ‘OK, we have this date available and this time,’ it’s just hard, knowing they’re going to be in pain. “

As with any major surgery, Shelby is on a host of restrictions. She has to be particularly careful until her sternum heals, which could take anywhere from six to eight weeks. More recently, Shelby has been working with an occupational therapist and with a physical therapist to get a better idea of how to do daily tasks without stretching her arms up and bending.

Shelby recently returned for a follow up appointment at Children’s to remove stitches and to check up on her progress. Doctors don’t believe Shelby will have to return for another surgery regarding the conduit, and they believe it should hold for the rest of her adult life, her mother said.

“I’m just thankful to God,” Charlotte Vaughn said. “We had friends who helped make arrangements for us if we needed them, and when we arrived up there they gave us gift cards, money, just anything that we needed. Just, ‘Here, don’t think about this, this is already arranged for you.’ ”

Both Danny and Charlotte feel humbled by the community’s support, and the support that has allowed them to focus on supporting their daughter. Shelby’s older brother, Stephen, who was taking classes at the time, stayed in contact with the family and his sister, all the way from Richmond, Kentucky via frequent video calls.

One program that has allowed the Vaughn’s to focus on their daughter has been the Ronald McDonald House, which provides meals, food, transportation, support and housing to families of sick children, all free of charge.

“We want to say ‘thank you’ to our Heavenly Father and all of you from the bottom of our hearts,” Charlotte Vaughn said. “The prayers and generosity of our family, friends, my work family at Hearthside Bank, and this community are so greatly appreciated. I cannot begin to tell you how much it means to us. Our heart hurts for what our daughter had to face and are full at the same time from all the kindness others have shown. The things you’ve done, and didn’t have to, are so very dear to us. Please know that we love you all so very much.” 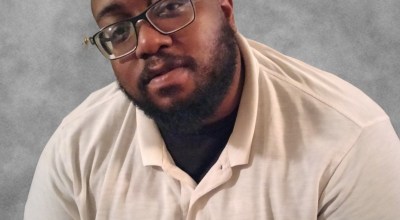 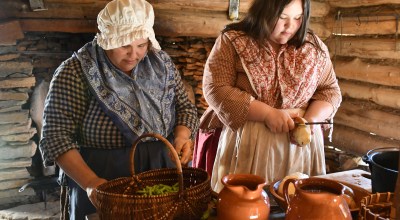 A revolutionary weekend at Martin’s Station