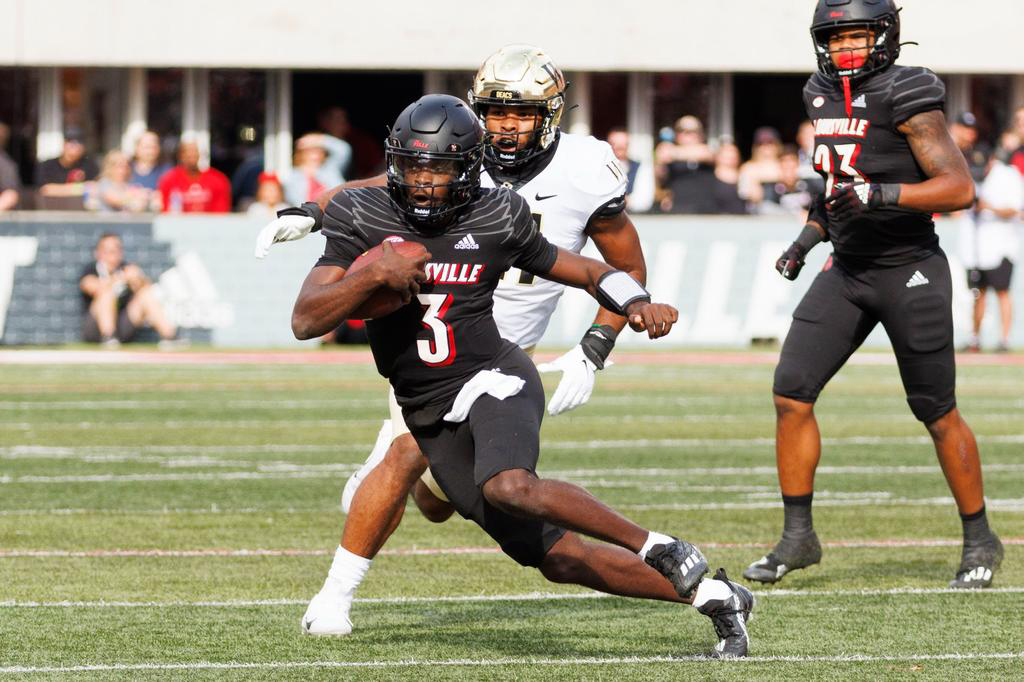 Louisville quarterback Malik Cunningham (3) is expected to return from an injury Saturday at Kentucky. U of L Athletics photo by Taris Smith

Although it’s not certain, it looks like Louisville will have quarterback Malik Cunningham back on the field to face Kentucky for the fourth time in the Governor’s Cup Saturday at Kroger Field in Lexington (3 p.m., SEC Network).

Cunningham missed last week’s 25-10 win over N.C. State with a shoulder bruise on his right (throwing) arm suffered against Clemson, but U of L coach Scott Satterfield said Tuesday during his weekly press conference that while the fifth-year senior’s status remains day-to-day, he is “pretty optimistic” about  his return.

“I think we’ve got a much better chance to have him back this week,” Satterfield said. “We’ll see where he stands as the week goes on. He’ll go out today and do some things with us. He won’t do everything today. He’s gonna be out there in unform and practicing, but it’s not gonna be like he gets normal reps.

“We’re hoping tomorrow a lot more, Thursday a lot more, Friday a lot more, and by Saturday he’ll be ready to go. That’s the plan; how it goes remains to be seen. But I feel good about it, pretty optimistic that he’ll be able to go.”

Offensive coordinator Lance Taylor said the coaches will need to know by Thursday or Friday if Cunningham is healthy enough to play. But he said Louisville’s game plan for the Cats will stay essentially the same if backup Brock Domann starts for the third time this season. Besides leading the Cards to the win over the Wolfpack, Domann guided them to a 34-17 victory at Virginia, highlighted by his 44-yard touchdown run up the middle on fourth down.

“Our game plan doesn’t change very much,” Taylor said. “Run game-wise we stay pretty consistent. We’ve run the ball really well, we’ve had explosive runs, we’re averaging more than five yards per carry in our run game. Brock doesn’t have nearly as many (called) quarterback runs, but most of our runs are reads anyway. So, he has the option of pulling it down and running, just like he did in the Virginia game.”

But Domann certainly isn’t the running threat that UK would have to contend with if Cunningham is taking the snaps. Cunningham leads the team in rushing with 556 yards and in touchdowns with 11. He has completed 62.7 percent of his passes for 1,552 yards and eight TDs.

“The thing is, defenses have to have a guy assigned to Malik because he’s such a dangerous runner, so that’s obviously an advantage for us,” Satterfield said.

Kentucky has done a better job containing Cunningham than any other team he’s played against more than once. In four games against the Cats, he has averaged just 146 yards of total offense, far below his normal production. This season he’s averaging 252 yards passing and running in the eight full games he has played.