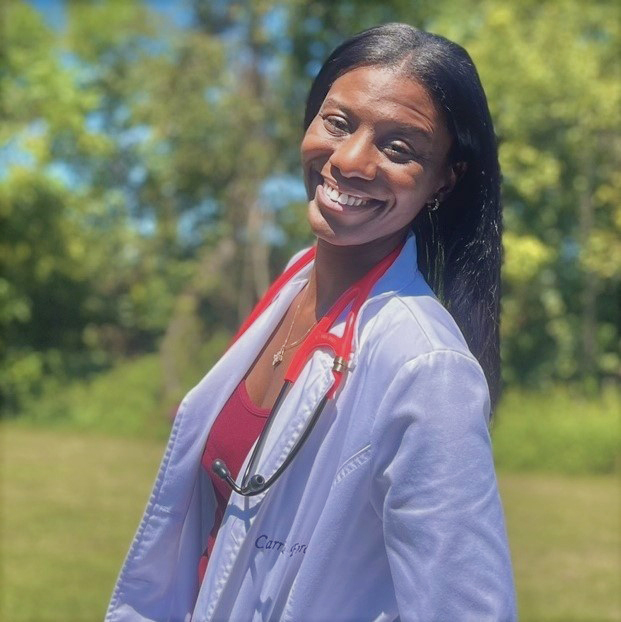 Carrie Ford has been awarded the 2022 Arnstein Minority Student Scholarship by the American Association of Colleges of Osteopathic Medicine. LMU photo

“An important part of the impact I want to make in the world is showing Black youth that they can achieve whatever it is they want careerwise, especially entering the field of medicine,” Ford said. “My dream is to one day have an organization that fosters higher education in underprivileged communities. It is vital that we have people of color in medicine to advocate for patients and bridge the cultural aspect of care.”

AACOM announced the recipients in October, recognizing the dedication and commitment of six exceptional student doctors. The scholarship was endowed by the Arnstein family to honor former AACOM Executive Director Sherry R. Arnstein’s legacy and to help at least one current and one new underrepresented minority osteopathic medical student fund their education.

Ford describes herself as an “all-around Southern girl,” born in Florida, and raised in Georgia by Alabamians. She graduated from Georgia State University in 2011.

She said her family in Alabama has, unfortunately, been impacted by health care disparities, so addressing them is a task near to her heart.

“I cannot fix every community, but my dream is to help as many as I can,” she said. “We need people who care about people to enter medicine. Furthermore, we need more people of color to enter medicine. Not because nonminority physicians are incapable of caring for patients, but there is a cultural quality to certain topics that may come across differently when the care-provider looks like the patient.”

Ford says she looks forward to caring for patients of all backgrounds, while inspiring more minorities to become caring physicians.

“We are so proud of these students and are very impressed with their dedication and commitment to osteopathic medicine,” said AACOM President and CEO Robert A. Cain, DO. “Patients are facing a growing challenge with accessing medical care, particularly in underserved and rural communities. Each of these recipients is committed to bringing osteopathic medical treatment to those most in need. They have demonstrated a track record of leadership and a passion for giving back to their communities. They strongly embody the spirit of Sherry Arnstein and will honor her legacy.”

Arnstein spent more than 30 years in public service, first in her native state of California and then in Washington, D.C.  While serving in the Kennedy Administration in the U.S. Department of Housing and Urban Development, Arnstein led the team developing the federal strategy to desegregate all hospitals in the United States. The segregation of hospitals was causing immense harm to minority patients and leading to poor access to healthcare and a poor quality of life; especially in rural areas and urban centers where healthcare options were minimal. Arnstein’s career is a testament to fighting for social justice and health equity. You can learn more about her at aacom.org.

The Sherry R. Arnstein Minority Student Scholarship was established in honor of Arnstein’s lifelong dedication to public service, social equity and justice. After the initial endowment AACOM continued funding for the program, which has grown steadily since its inaugural grants were awarded; each year receiving more applications and awarding more scholarships. Since 2012, AACOM has awarded more than $200,000 to 57 recipients.

The DeBusk College of Osteopathic Medicine is located on the campus of Lincoln Memorial University in Harrogate and at LMU-Knoxville. LMU-DCOM is an integral part of LMU’s values-based learning community and is dedicated to preparing the next generation of osteopathic physicians to provide health care in the often-underserved region of Appalachia and beyond. For more information about LMU-DCOM, call 800-325-0900, ext. 7082, email dcom@LMUnet.edu, or online at http://med.LMUnet.edu.