Topographic maps are a good outside tool 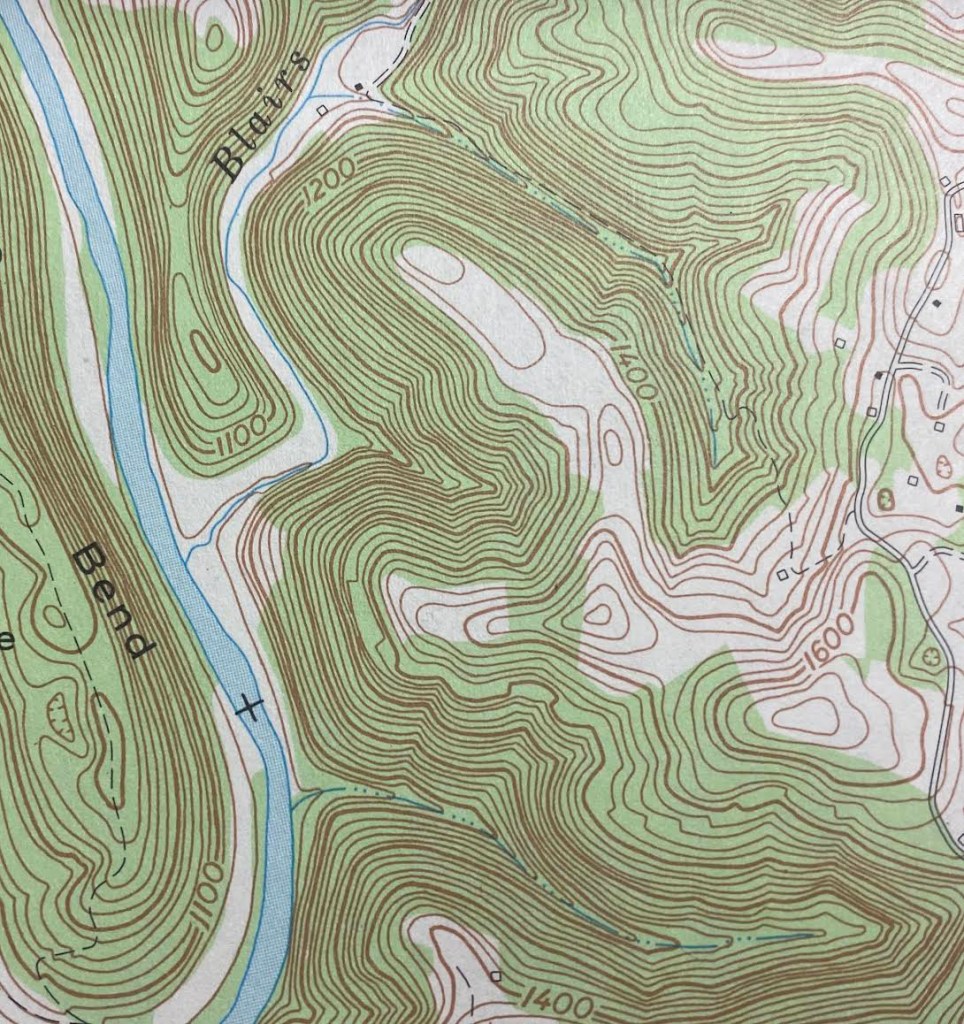 The trick to reading topo maps is learning to identify geographic features by the shape of the contour lines. Steve Roark photo

Our area is geologically a bumpy place, with mountains, valleys, streams, and other features. If you can read a topographic map you can keep up with where you are and find useful and interesting information.

A topographic map is similar to other maps, indicating the location of roads, buildings, caves, dams, ponds, streams and rivers. It is unique in that is also indicates the location of ridges and valleys, and gives the elevation of any point on the map. This is done using a series of lines called contours, each indicating a different elevation level. Most topo maps have contour intervals of 20 feet, meaning each line is 20 feet higher or lower than its neighbor. Contour lines running close together indicate steep hills, while those wide apart indicate more level land.

The trick to reading topo maps is learning to identify geographic features by the shape of the contour lines. Ridges appear as a series of lines running close together, with occasional circular shapes in the middle. These circles represent ridge peaks, and are fairly easy to discern. U shaped contour lines indicate side (I call them spur) ridges coming off a main ridge. V shaped lines indicates drains between ridges. Another hint is that if the open end of the U or V shaped area faces the ridge, it’s a spur ridge. If the open end faces away from the main ridge, it’s a drain (or hollers as we locals call them). A blue line in a drain indicates a running stream. Topo maps use green to indicate forested areas, and white to indicate cleared land

For hiking or hunting, topo maps are golden, since they give you a 3-dimensional view of a landscape before you travel over it. Since they indicate the steepness of the terrain you can use them to avoid rough terrain in favor of easier walking. Hunters are able to locate peaks, valleys, saddles and slopes, all important terrain features for locating game. Determining the direction slopes face (called aspect) gives an indication of soil moisture and where food plants are likely to be present. East and north slopes tend to be moist and cool, while south and west slopes are dryer and warmer. Topo maps are to scale, and so are useful in determining distances. Standard topo maps have a scale of 1 to 24,000; meaning 1 inch on the map represents 24,000 inches in the field. In feet 1 map inch equals 2000 feet.

Topographic maps are developed by the U.S. Geological Survey, and are available at map stores and online. Each map covers a certain land area called a quadrant (quad for short), which has an identifying name, such as Middlesboro South. You can order or download topo maps on line from USGS and a site called TopoZone. A free website that has good topo maps and aerial photos is Map Produced by GISsurfer.