UK’s Castle likes being pushed to be the best 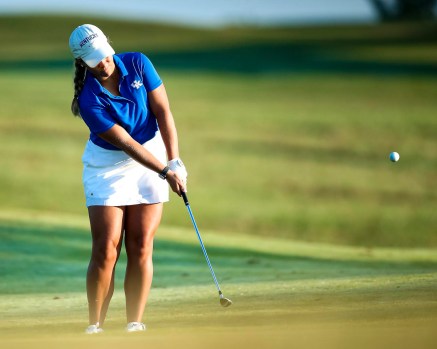 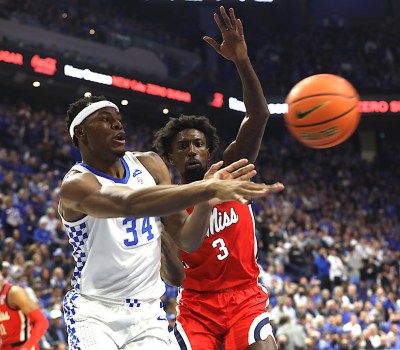 All-American Oscar Tshiebwe not only wants to have double-doubles for UK this year, but he's also interested in writing a variety of books. UK Athletics photo by Vicky Graff 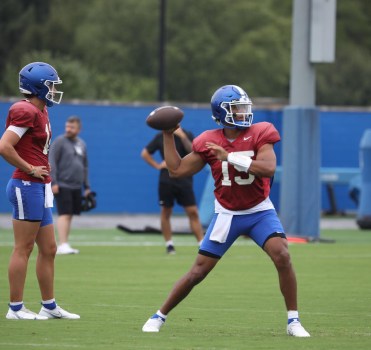 The better her team plays, the better Jensen Castle feels she has to play not only to help her team win, but also to continue to prove she can be the best player on a team that has a lot of good players.

The University of Kentucky senior golfer recently was named the Southeastern Conference Golfer of the Week after leading UK to back-to-back tournament championships and winning the first medalist honors of her collegiate career in the Ruth’s Chris Tar Heel Invitational that had some of the nation’s best teams, including No. 1 Wake Forest and No. 8 Duke, and players.

“I played really sound and so did our team,” said Castle, who won the 2021 U.S. Women’s Amateur Championship. “It’s always more motivating when you have a better team. It motivates me to play well when our 4 and 5 (players) are playing so well and so are 2 and 3. We have a great team at Kentucky. Everybody is so chill and that makes it easier to play good golf.”

“We were capable of playing like this last year but just had a hard time getting something going at the same time,” Castle said. “We were right there at times but just had a hard time getting rounds finished for everyone. We have finally found a way around that. Golf comes and goes at any level. But the past few weeks we all played consistent golf at the same time and fought through any adversity we had.”

Castle had a 74 in the first round of the Ruth’s Chris Tar Heel Invitational but bounced back with rounds of 67-68 and her 209 total was the fourth best of her collegiate career for a 54-hole event. She needed an eagle on the 53rd hole — a par five, to get into a playoff with Duke’s Phoebe Brinker. She parred the first playoff hole to win.

“Winning was really important to me. I have been here four years and come close to winning multiple times, so doing it was special,” Castle said. “I have won a national event but winning this to gain confidence was really big for me. It was a goal of mine to win an event and to do it so close to home (she’s a South Carolina native) and against such a solid field was special. It showed I can hang with the big dogs and Kentucky can, too.”

Castle was determined not to let the opening 74 ruin her tournament and birdied her first three holes in the final round. She said wins and difficult pin positions made scoring difficult and she had to play safely to the center of a lot of greens. She still thought going to 18 that she needed a birdie to get to the top spot.

“I actually hit a great drive on 18 and had a great birdie look. I hit a really good putt that just missed,” she said.

Jensen knows team success in the fall does not automatically translate to the same success in the spring. That’s why even with a win over the nation’s No. 1 team, she says the Cats have to maintain their focus and structured practice for the spring season.

“Every team is different and we just have to keep working to strengthen our short games and then let everything take care of itself,” Castle said.

Castle knows not to take her success for granted either despite top five finishes in UK’s last two tournaments.

Sophomore Laney Frye had UK’s lowest score in the first fall tournament before Castle did in the next three.

“I want my teammates to beat me. Laney was 8-under that first tournament and I was super excited for her. But it told me I needed to play better,” Castle said. “Everyone on our team wants to be the best on the team. We have seven great girls. Multiple times this year we have had two girls fighting for first place. That’s big. I had three solid tournaments but that came after getting my butt kicked the first tournament.

“Laney was just one shot back of me in our third tournament and one shot back again in our last tournament. She is right there, so that motivates me. We push each other. College coaches want players who compete to be the best and we have that now. It was not like that my freshman year.”

Castle said her U.S. Amateur Championship win still is mentioned by competitors or others who recognize her. That’s fine with her because it was a “very special moment” in her life.

“I could not be more grateful for the Amateur win and the attention. It has been a whirlwind since then but I will never take that for granted and I would hope anyone who wins the Amateur would not,” she said.

Now she has the same dream as college basketball player of the year Oscar Tshiebwe or other star athletes at Kentucky do. She wants to be national champion.

“That is the goal. Everyone in sports dreams about a national championship for a team more than an individual,” she said. “I think about it but I can only control what I control. I could tee it up, play great and somebody just play better. If someone is on, they are on. If that happens, then it is what it is.

“I just hope to get better every day. It’s a simple mindset but that’s how I play my best golf. I would love to be in the running for a national championship but we have eight events before then and I just want myself and my team to keep getting better until then.”

Kentucky can’t overlook Missouri: Kentucky football came into this season thinking it could compete with Georgia for the SEC Eastern Division championship with a future first-round NFL draft pick at quarterback in Will Levis, a superstar running back in Chris Rodriguez and a veteran, deep linebacker group.

Instead, going into Saturday’s game at Missouri the Cats are now 5-3 and just 2-3 in SEC play after getting destroyed 44-6 at Tennessee.

“We have to respond. It is a tough, competitive league. We know that going into it,” Kentucky coach Mark Stoops said. “The last time we lost a game (at Ole Miss), we lost two (South Carolina and we didn’t have our best effort after that (Ole Miss) loss.

Kentucky had over 600 yards of total offense and scored 42 points against Tennessee in 2021. Last week it had 205 yards and scored just six points, a continuing trend of trouble generating offense against SEC foes this year.

“Obviously it has not been good enough at times,” Stoops said about the offense. “It is too inconsistent. We all know we need to play better and coach better and have a better competitive spirit about us.”

Next up for Oscar – write a book: Just when you think there is nothing Oscar Tshiebwe can say that will surprise you, he does it again.

Recently he was on the UK Sports Network talking about his future. He’s recently had knee surgery that will keep him out of UK’s exhibition games but he wanted to talk about another passion — writing.

He noted people “bury” many things/thoughts that will keep them from accomplishing things. He wants to write a book on how to become a champion.

“Another one (book) is choose your side. God wants me to write that one for him,” the UK center said.

He said people either choose God’s side or choose the world’s side. He knows God wants them to choose his side.

“I have so many things I want to write about. I don’t know when. You will be surprised,” Tshiebwe said.

Assistant coach Orlando Antigua says nothing about Tshiebwe surprises him.

“He is so unique, so positive about everything and with everyone he meets,” Antigua said. “It makes it hard for anyone to take shots at him and not be for him. He’s just special and if says he’s going to write books, then he’s probably going to do it.”

Coaches high on UK freshman: Freshman Kobi Albert was a four-star high school player in Alabama who excelled on both offense and defense. Kentucky decided to use him in the secondary and he’s not yet made a big impact for the Cats.

However, the UK coaches still have no doubt he will be a special player and likely will see a lot more playing time the rest of the season.

“Kobi is a guy that is very athletic. He has very good cover skills and can really run,” coach Mark Stoops said.

He has played in five games, mainly on special teams, but is now getting more work with the regular rotation.

“He has so much athleticism. He’s got that quick twitch you want. He can close a lot of ground really fast,” defensive coordinator Brad White said.

“He’s an easy move. He’ll come down and he’ll really strike you. He’s got all the tools. Figuring out what to do is his biggest step … but when he does he’s going to be a really good player. We’re just trying to find ways to use him the best way.”

Another freshman who has not had his chance is quarterback Destin Wade, who has earned a spot on the depth chart even if he has not played.

“We wanted to play him in the game when Will (Levis) was out, the South Carolina game. We wanted to get him in there. It was just, again, one of those games where the opportunity just didn’t present itself,” Stoops said.

“I wish it would have for us to see, get Destin in there and give him some play, but he’s been getting better. I think that’s the big thing. Sometimes quarterbacks, everybody thinks it has to come to him right now, and a guy that’s highly recruited like him, but again, it’s a developmental sport, he’s getting better. As long as he keeps that positive attitude and works hard like he is, he’s making really big progress.”

Stoops says Wade understands he has to put in his time to play quarterback in the SEC.

“You just got to put in time. He’s gotten better since day one here, and he just keeps on. He needs to keep on making strides like that,” Stoops said. “And if he keeps that same approach and puts in the work like he is, good things are going to happen to him.”