Most of Kentucky in some level of drought status 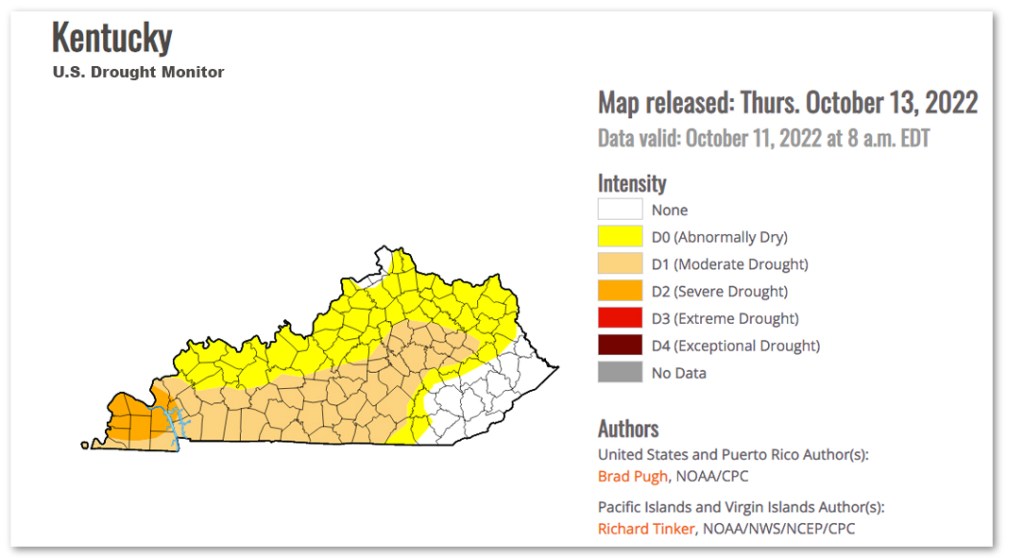 Most of Kentucky in some level of drought status

The latest U.S. Drought Monitor report, issued Thursday, shows Kentucky’s drought area increasing, due to little or no precipitation recorded for the seven-day period that ended on Tuesday.

The Oct. 13 report saw the area of Kentucky experiencing no drought condition shrink from 34.15% of the state on Oct. 6, to the current 15.32%. That area included all or parts of 19 counties in eastern Kentucky, including Bell County, and parts of three counties in northern Kentucky.

The rest of Kentucky is in some stage of drought ranging from abnormally dry to moderate to severe drought.

The area considered “abnormally dry,” or D0 on their scale of D0 to D4 (where higher numbers indicate deeper drought), actually shrunk during the past week, from 57.31% to 39.80%, but that’s due to drought conditions now being reported in that area.

Areas in “moderate drought,” or D1, increased from 5.72% to 39.58%. Most of the Jackson Purchase area of western Kentucky is D2, or “severe drought.” That increased from 2.83% to 5.30%, during the past seven days. The D1 and D2 areas are the largest since July. No part of Kentucky is considered to be in either “extreme drought,” D3, or “exceptional drought,” D4.

The estimated population of Kentucky that is in a drought area, D1 or D2, is now over 1.5 million.

Brad Pugh with NOAA’s Climate Prediction Center offered his analysis, saying, “A broad expansion of D1 was required throughout Kentucky due to a prolonged dry spell since August. This D1 coverage is consistent with the 60-day Standardized Precipitation Index and is also supported by NASA’s Short-term Prediction and Transition Center soil moisture.”

He also noted, “According to the Paducah National Weather Service Office, Paducah had its driest Aug.1-Oct. 11 on record, with only 2.12 inches of precipitation. Multiple reports from Livingston, Fulton, Webster, Marion, Carlisle, Trigg, and Ballard counties indicate poor pastures and low ponds. In addition, low flows persist along the lower Ohio River.”

There is no major relief in sight for the dry conditions. Looking ahead, through Oct. 17, the forecast calls for below-normal temperatures and just a slight chance of showers in the Ohio Valley.

The Climate Prediction Center’s 6-to-10 day outlook, Oct. 18-23, strongly favors below-normal temperatures across the eastern and south-central U.S. with a persistence of above-normal temperatures over the West. Most of the contiguous U.S. is likely to experience drier-than-normal conditions.