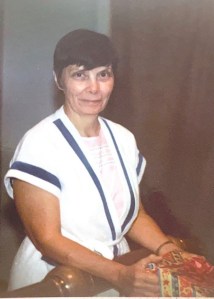 Nancy Louise Hancock passed away peacefully in her sleep at the age of 97 at 5:11 p.m. the evening of Monday, October 3, 2022, at the Claiborne Health and Rehabilitation Center in Tazewell TN.  She was surrounded by her daughter Janet, Janet’s husband of 51 years Marshall Gilliam, their son Nathan Gilliam and daughter Andrea Gilliam Baulch, and youngest son Mark Hancock.

She was born to Emil Charles & Leona Estella Wipf in Philadelphia, PA and spent the early part of her life in Philadelphia, graduating from High School at 16 years old and going to work for Curtis Publishing.  She subsequently went to work at General Electric where she met William Birch Hancock, who she married on September 22, 1944, while he was on leave from serving in the Army under General Patton. Upon being honorably discharged from the Army William and Nancy moved to Troy NY where William enrolled at Rensselaer Polytechnic Institute.  During their time there their oldest son Jeffrey William and daughter Janet Lynn were born in 1947 and 1949, respectively.  After graduation the family moved to Oreland PA and in 1957 their youngest son Mark David was born.  In 1960 they moved to Tiburon CA and lived in various CA cities until 1968 when Nancy returned to Philadelphia to live with her mother, Leona Wipf, with whom she would spend the next 20+ years until Leona’s death in 1986.  Janet and Marshall moved Nancy from St. Petersburg FL to Middlesboro, KY where she lived happily until early 2017 when she moved back to Vallejo CA to live with her oldest son Jeffrey and his wife Pearl.  After falling and breaking her hip in 2019 and requiring the full time attention of a care facility her beloved granddaughter Andrea arranged for her to be moved to Claiborne Health and Rehabilitation Center in Tazewell TN in April 2019.  This facility was close to both her daughter Janet, her husband Marshall and her grandson Nathan Gilliam and his family.  She was lovingly cared for by the Claiborne staff for the remainder of her life and enjoyed a steady stream of visitors, both family and friends from the New Tazewell Kingdom Hall of Jehovah’s Witnesses, until her peaceful passing.

Services will be officiated by her grandson-in-law Jared Baulch with closing prayer by Hershel Wilder.

Register book and online condolences are available at www.cawoodfh.com

Cawood Funeral Home, Middlesboro, KY, is in charge of all arrangements.