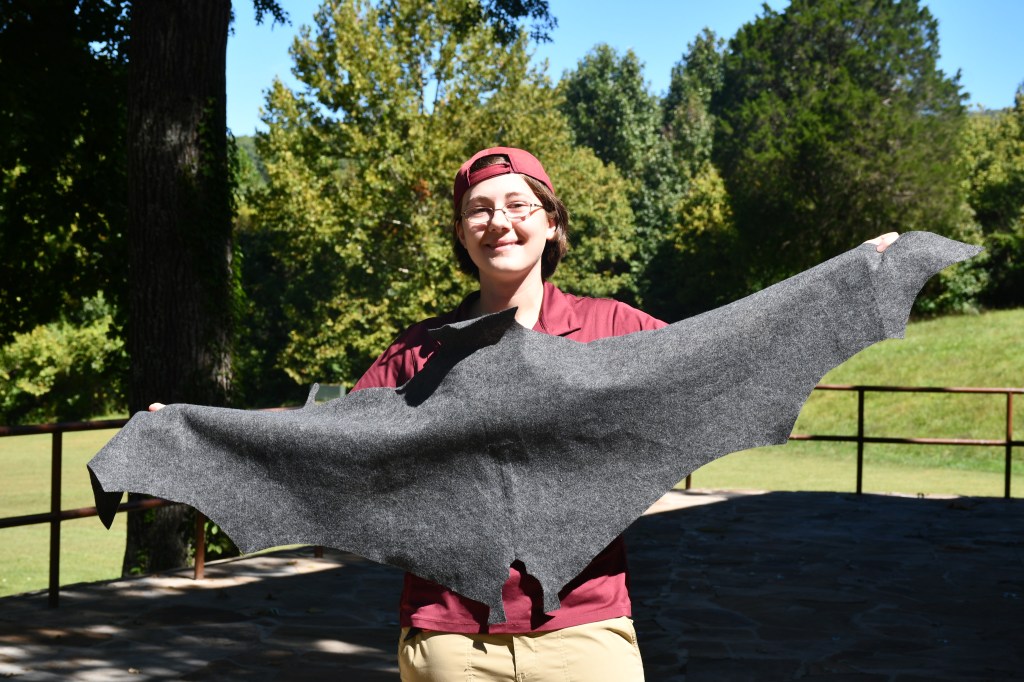 Rachel Teeter with a model that shows the wingspan of the largest bat in the world, a flying fox, which is found in parts of Asia, Australia and Africa. Photo by Jordan Brooks

The Bell county libraries and The Cumberland Gap National Historical Park are working together to host an upcoming program at both the Pineville and Middlesboro libraries in October. Bat enthusiast Rachel Teeter from the park is doing the reading program: Bats! At the Library.

The program will feature stories read by Teeter and a bat-themed craft.

“For the library program, I will be reading out some books. The park has a fund set aside specifically to inform people about bats.” said Teeter. “I’m especially happy because this year we got (the kids book) Stellaluna.”

Teeter is taking her message to the libraries and to the children because she believes bats are misunderstood.

“Bats get a bad reputation because ‘they’re out all night,’ and ‘stuff that happens at night’s creepy,’ but if we can get kids interested in bats, and teach them stuff about how cool bats are then we can definitely make a difference. We’ve already been invited back to the Tazewell library to do this again.”

The most significant threats to bat survival are people and loss of habitat. Vandalism and disturbance of roosting caves, loss of tree snags and exposure to agricultural pesticides seriously threaten remaining populations. There are dozens of bat species found in the U.S., at least 40 according to the U.S. Geological Survey. Because of the wide variety of food they consume, including insects such as mosquitoes, moths and beetles, as well as fruit, pollen and nectar, bats play an important role in the ecosystem. However, these habits also expose them to many pesticides used in agriculture. The loss of bats could have adverse effects on the ecosystem.

One such threat to bats is white-nose syndrome, named for the white, fuzzy growth on the nose, ears, and wings of some affected bats. A fungal disease of unknown origin that was first detected in 2006 in the Albany, New York area, WNS has been known to wipe out huge swaths of bat colonies across North America. It has since been found in Europe and Asia, as well.

Research has found a few different ways WNS can be spread among the bat populations. The fungus that causes WNS is transmitted primarily from bat-to-bat and bat to cave. WNS spores can live in the soil and caves of mines where bats hibernate for years, and healthy bats entering infected sites may contract WNS from the environment. Scientists believe it might also be transmitted by humans inadvertently carrying the fungus from cave to cave on their clothing and gear.

Scientists around the world are urgently studying WNS. Many field and laboratory projects are underway as researchers try to understand how WNS is killing bats, how to prevent it as well as how to protect surviving bats.

Bats are an essential part of our environment, eating insects, pollinating plants, spreading seeds, and much more. With some local bats eating more than half their body weight in insects every night, they are the primary predators of a lot of nocturnal insects that are normally “pests” to people. Many of these insects are serious crop or forest pests, or can spread disease to humans or livestock.

“Losing bats, locally and regionally, could actually cost us billions of dollars in increased pesticide use and agricultural damage each year,” said Teeter.

“Bats are in trouble from this white-nose syndrome, and they’re really important to people. Some bats can eat half their body weight in insects every night, and that’s going to include mosquitoes that carry zika (virus), malaria, and they also provide billions of dollars of agricultural assistance to farmers every year.”