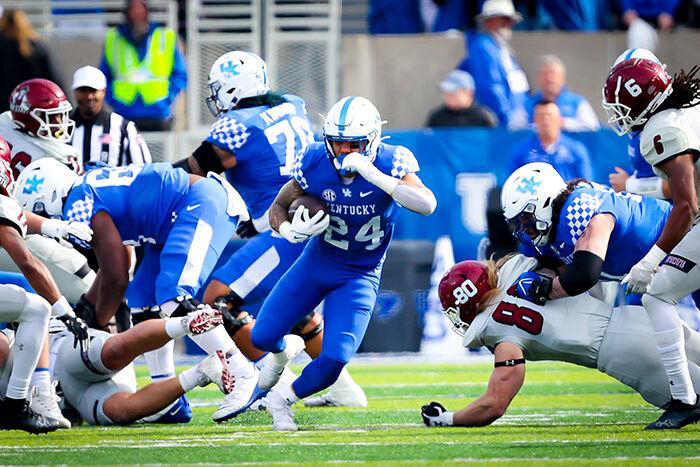 Kentucky coach Mark Stoops wants running back Chris Rodriguez to simply be himself when he returns to the lineup Saturday at Ole Miss.

After sitting out the first four games because of a suspension relating to off-the-field issues last summer, Rodriguez is back on the team’s depth chart alongside Kavosiey Smoke as the top running back. Jutahn McClain is listed at third string.

“He doesn’t need to come in and be our savior or anything like that, or save our run game and any of that,” Stoops said Monday. “We don’t need him to worry about that. We just need him to be him.”

Without Rodriguez in the lineup, the seventh-ranked Wildcats (4-0, 1-0 Southeastern Conference) have struggled to gain traction in the backfield. Kavosiey Smoke has carried most of the load in Rodriguez’s absence. The Wildcats rank 13th out of 14 SEC teams in rushing offense with 326 yards through four games.

Kentucky has known when Rodriguez would return to the lineup and has been “managing” his progression during the past two weeks.

“While he was out, (we’ve) just getting him the reps that we needed to the last week or two,” Stoops said. “He was getting reps with the first and second team, mainly the second team, or just different quarterbacks, just to make sure he wasn’t totally removed from practicing our plays, along with staying in shape, being on the scout team, doing whatever was necessary, staying in good shape.”

Stoops has been concerned with his team’s progression on the offensive line, but likes the way the Wildcats responded in the win over Northern Illinois last Saturday.

“There are several runs that they could’ve hit up in there without a doubt,” he said. “There were other times when it was cloudy, and you could understand what they saw. There are a lot of things we could clean up and I thought they were doing some things that were creative. They were twisting and getting some guys in some gaps and then there were times when we hit it pretty well and sealed them up. We just want more consistency.”

The Wildcats gained one spot and moved up to No. 7 in the Associated Press Top 25 poll. Stoops likes the progress his team has made in the rankings.

“I’d like it to stay there,” Stoops said of the No. 7 ranking. “That’s really what’s most important. Sure, it helps with the fanbase and showing up and having the people there. It helps with recruiting. It helps with your team and hopefully it motivates them to practice hard to stay that way because, we know we have a very tough stretch starting here this week.”

Brown caught four passes for 102 yards and two touchdowns. He hauled in a 70-yard touchdown reception and a 15-yard catch for a score. The 102 receiving yards were the most for a freshman since Garrett “Juice” Johnson had 154 yards receiving against Florida in 2014.

Brown received the league’s SEC Special Teams Player of the Week after he scored on a 100-yard kickoff return in a season-opening win over Miami (Ohio). In his first season, Brown has caught 13 passes for 201 yards, an average of 15.5 yards per catch.