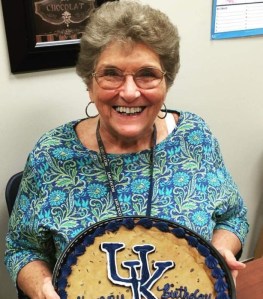 She was a 1957 graduate of Middlesboro High School and later completed her bachelors in accounting at Lincoln Memorial University where she was hired following graduation.  After a brief period in the admissions department, Pat became the university’s director of financial aid where she helped countless students find money to go to college for more than 20 years.  After two decades she departed for Pellissippi State Community College where she also served as director of financial aid.  Approximately 15 years later and a short time after retirement, her alma mater called and Pat took over as the director of financial aid for the university’s newly formed medical program from its inception.  There she worked with a passion for remainder of her career until retiring permanently at the end of September 2020.

Throughout more than four and a half decades, she has assisted literally thousands of students in finding money to gain their college and post graduate degrees and to become everything from educators to doctors.  Many of those students didn’t believe those goals were attainable due to ther finances.  Pat however worked diligently to find money for each student and has been quoted numerous times as saying, “I don’t work for the university, I work for the student”.

In addition to her career in higher education, Pat had a sincere love for music and especially singing.  From Sinatra to Belafonte, Pat Boone, Lionel Ritchie and Nat King Cole she loved it all.  She was of the Catholic faith and was for years the principal voice in the Saint Julians Church choir. She also loved her Kentucky Wildcats.

Visitation will be Monday September 26, 2022 from 1:00 p.m. to 3:00 p.m. at the Cawood Funeral Home Chapel with Elder Steve Green officiating.  Services will be thereafter followed by a graveside and interment by Father Jesuraj of St. Julians Catholic Church at Mountain View Cemetery in Forge Ridge, Tennessee.

Cawood Funeral Home, Middleboro, KY, is in charge of all arrangements.