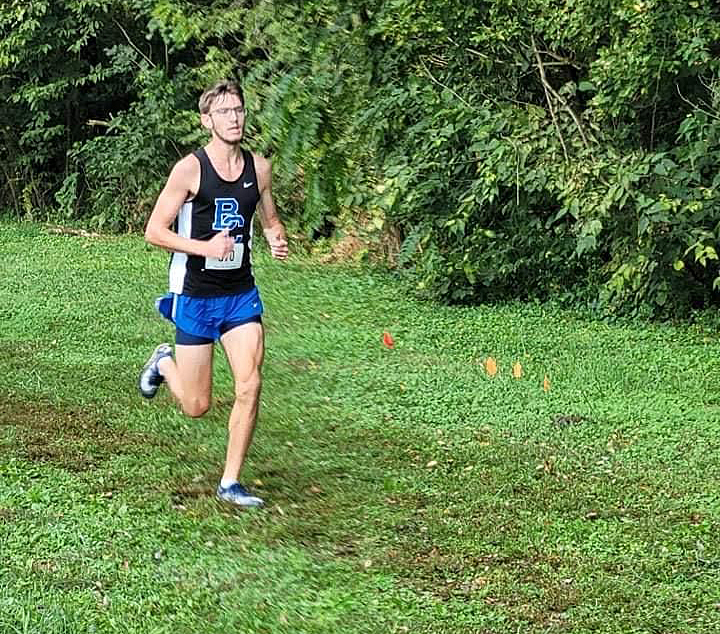 Senior Caden Miracle hopes to make it back to championship form for Bell High this season. Photo submitted

Numbers aren’t too high for the school this season, but Stewart has high hopes.

“We have 10 boys varsity runners and nine girls,” said Stewart. “We have five middle school boys, two elementary boys, and an elementary girl.”

This year’s members have talent and speed.

“Our boys team is a preseason top 10 in the state squad. So they have some pressure on them,” said Stewart. “We do have guys though who are battle tested. They’ve all raced in state championships before, so they are experienced.

“We have a lot of leadership on our boys team, so I think that’s a huge strength. Corbin will still be the team to beat in the region. They are talented and they reload year after year,” he added. “Our guys will race hard though, they always do.

One familiar face is returning this season for his senior year.

“We have the defending class 2A state champion in senior Caden Miracle, strong seniors in Johanan Woodring, JJ Arno, and Nathan Miracle,” said Stewart. “We also have one of the top freshmen in the state in Nickel (Nicholas Stewart) plus our other guys (Reese Arno, Hayden Green, Jacob Brannon, Braydin Hickey, Landon Eldridge), who bring it every day.”

Stewart is expecting great things from his girls participating this year.

“On the girls’ side, we will be much improved from previous year’s teams,” he said. “Most of these girls got to experience running at state last year and I believe they are hungry for more. We have a very talented junior in Milka Woodring, she’s crushing the early workouts so far.

“We have two seniors, Jasmine Clouse and Kaylin Hickey, who are putting in the work. I expect freshman Sophia Good to have a big season also. We also have other girls who have really improved.

The Bobcat coach has talent for years to come in middle school and elementary.

“We have returners in Andrew Roy, Eli Knuckles, Jonah Slusher, Andrew Hoskins, Eli Green, and Aubreigh Green who I know will be much improved and fun to watch. Also, we have a first grader in Logan Good who’ll race hard for his age.”

The goals are set for Bell County already.

“Our main goal for the season is for both squads to get back to the state championship. We have the talent to do it, they just have to put in the work,” added Stewart. “Our boys team will be trying to repeat as conference champions and make a run for the regional title.

“Our girls team will be looking for that first-team win since about 2014, and I think they can get one this season.”

So, who leads the blue and white this season?

“On the boys side, Caden’s our guy. He’s ran for years, he’s the state champ, he has to do it. But all of our guys hold each other accountable and push each other,” said Stewart.

“For our girls, senior Kaylin Hickey is the most vocal by far. Once races start, she’ll make sure they have their heads in the right place. I do hope a few other girls step up in the leader role as well though.”