UK’s Green eager to get back on the court 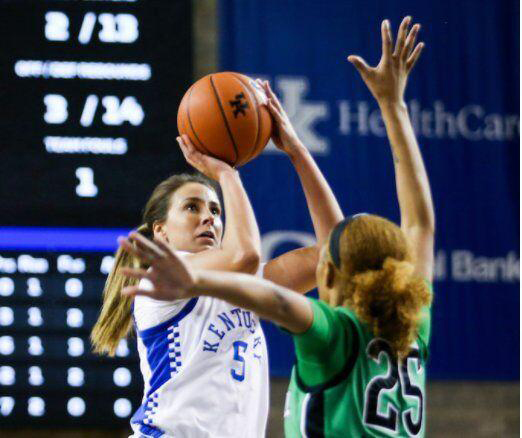 Harlan native Blair Green is eager to get back on the floor at UK after missing last season with an injury. Kentucky Today photo

As a student-athlete, Blair Green has been around at UK for awhile, and she loves it.

The 6-foot basketball standout will be beginning her fifth year as a Wildcat, including last season when she missed the entire 2021-22 campaign due to a ruptured Achilles. She is now classified as a graduate student after earning a bachelor’s degree in communications with honors last May.

Because of an extra year of eligibility given to all college athletes by NCAA due to the Covid-19 pandemic, Green even can play again in the following season of 2023-24.

But Green recently said this coming season very likely will be her last one at Kentucky and she is looking forward to it after sitting out a year. Before she got hurt, she earned 18 starts in 27 games during her junior year of 2020-21, averaging 6.0 points, and also led the Cats in scoring with 22 points against Vanderbilt during UK’s 80-73 win at Memorial Coliseum.

“I’m just going to have an unbelievable great year for myself and the team, and hopefully we can win another (SEC tournament) championship and I can call it a year and just see what the future holds for me, whether that’s in basketball or another field,” said Green, a four-star prospect from Harlan County High School where she averaged 26 points and 6.5 rebounds as a senior. “I’m excited for whatever my journey brings. But I think this will be my last year of college.”

As you may recall, the red-hot Wildcats stunned everybody last March when they defeated top-ranked South Carolina 64-62 for the SEC tournament title in Nashville. After a loss to Princeton in the NCAA tournament, Kentucky finished its remarkable season with a 19-12 mark (8-8 SEC regular season), which included a 10-game winning streak.

Her mother, Debbie Hoskins Green, who coached Blair in high school, has closely followed her daughter at Kentucky.

“Her entire career at UK has been amazing,” said her mother. “I’m extremely proud of the work she has put in. To say she has played in every game since she has been a freshman is an amazing accomplishment for any player, especially in the SEC, and (she made) SEC Academic team honors four years and SEC All-Freshman team.

“(My) favorite UK game was the Vandy (contest) her junior year when Rhyne (Howard) was out injured, and she helped lead them to a win.”

Blair Green was asked about Kentucky’s turning point last season when the Cats bounced back and finished strong in winning the conference tournament title. That was after a mid-season slump that included a pair of four-game losing streaks to SEC teams.

Green commented, “We went on a losing streak and we finally hit a road.

We were kind of wondering what was wrong because I felt like we were talented enough and we had everything that we needed even though numbers were down at times.

“After some losses, we finally sat down. We had to see what we had to do just to qualify for the NCAA tournament, how many games we need to win to get there. It kind of just clicked in our head and we started doing more team-building. We tried to make things more fun for us. Just enjoying playing the game again and I think that’s what we did.

“We really came together. It just kind of got on a roll and everyone started having more fun and playing together, and we just knew that we had to win because we didn’t want to stop playing. So, we had to do what we had to do. It just started becoming fun and we started growing our chemistry.

Everyone locked in on the same goal.”

For the upcoming season, Kentucky, which returns five players, will have a new look with 10 talented newcomers (six freshmen and four transfers) on

the roster. The returnees include Green, Nyah Leveretter, Jada Walker, Emma King and Robyn Benton. All five previously have started for the Wildcats.

UK will also participate at the 2022 Baha Mar Pink Flamingo Championship at the Baha Mar Convention, Arts &amp; Entertainment Center in Nassau in the Bahamas during the Thanksgiving week.

Green was asked about the new players coming in. “They are awesome.

They’re really strong and they have such positive energy and the willingness to work every day,” she said. “They’re just such hard workers.

They bring such a competitive edge to the team and just resilient. So far they’ve been awesome and I’ve enjoyed playing with them.”

With Green now a veteran presence in the women’s basketball program, she is expected to provide leadership and she is comfortable with it. She added that even getting injured last year has been a kind of blessing.

“I’ve learned so much from my coaches,” she said. “I was in a leadership role last year and then once I got injured, it was kind of a different leadership role. They kind of put me in as a coach-player leadership role. It really made me step out of my comfort zone and speak up as a leader, not just show by example, but just have to use my voice all the time because I wasn’t able to do anything physically. I had to step up vocally. That really led me into who I am today and this year.

“It’s just been great so far. My coaches continue to challenge me and put me in positions where I have to speak up and huddle my team and lead them. And they always rally around me. This young bunch, they’ve just been an easy team to lead. I mean they kind of make my job easy honestly.

Jamie H. Vaught, a longtime sports columnist in Kentucky, is the author of five books about UK basketball, including recently-published “Chasing the Cats: A Kentucky Basketball Journey.” He is the editor and founder of KySportsStyle.com Magazine, and a professor at Southeast Kentucky Community and Technical College in Middlesboro.