Concert series winding down: Victor Wainwright and the Train highlight second-to-last performance of ’22 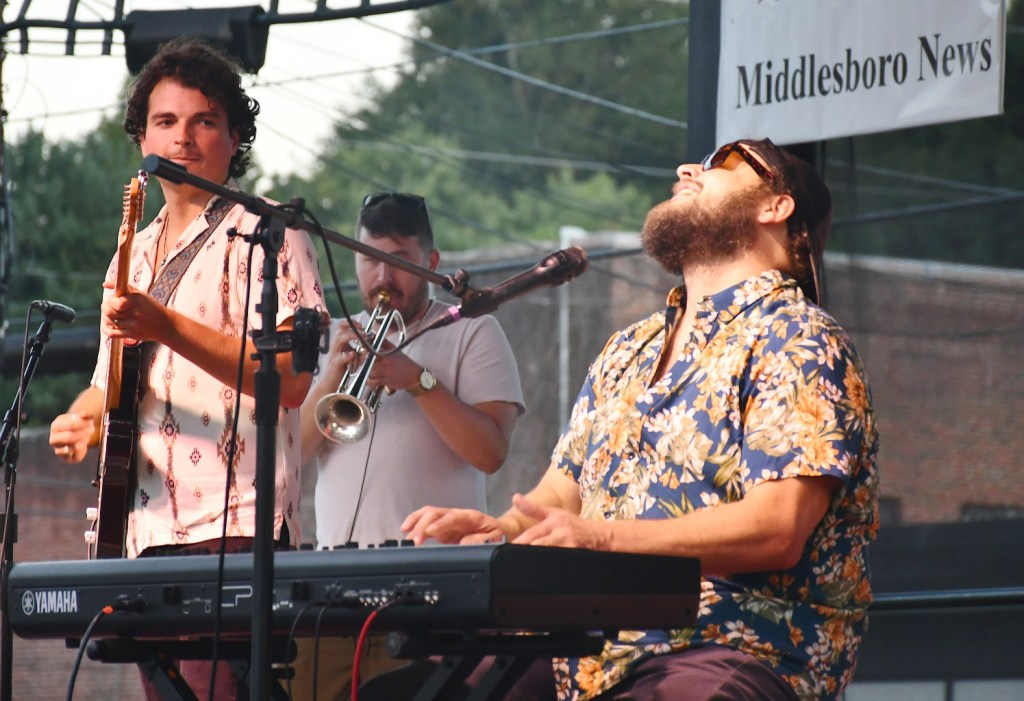 Victor Wainwright and the Train visited the Middlesboro Levitt stage last Thursday for the penultimate performance in the summer music series.

Though his career began over a decade ago with genuine rock n’ roll honky-tonk, Wainwright has broadened his artistic scope over the years to include music representing virtually every corner of the roots music world. His insatiable interest in music discovery, sheer love for entertaining and curiosity have led him all around the world, and the resulting perspective is a reflection of his passion for entertaining and creating progressive roots music in an effort to move the art-form forward. Composer, producer, vocalist, and award winning entertainer and piano player – Victor Wainwright is a raucous high-octane, dynamic performer, and crowd pleaser with soul to spare.

The name of Victor Wainwright’s band – and the sleeve image of its albums – is also the most fitting of metaphors. In music folklore, the train might have associations with the freight-hopping bluesmen of yore, but with this restless boogie-woogie innovator stoking the furnace, Wainwright is a charging locomotive – surging forward, crashing through boundaries of genre, sweeping up fresh sounds and clattering headlong past the doubters.

“If you wanna boogie get aboard the train/Get yourself a ticket or get out of the way…” as Victor hollers in the ivory-pounding title track.

At a sweet-spot in his career, where most established stars would rest on their laurels, Victor Wainwright & The Train instead rips up all that has gone before, pricking up ears in a sterile music industry and stretching the concept of roots in bold directions.

The originally scheduled artist, Few Miles On, comprised of three veteran musicians from Detroit, Chicago and East Texas, were unable to make it to the show. Instead local musician Levi Cadle performed, bringing a soulful and blues sound to the stage.

Early last week, the city of Middlesboro lost a fine community leader, and many have lost a dear friend with the passing of Joan Miller. She was honored from the stage at Thursday’s concert.

“Joan was a valued member of the Codes Enforcement Board, who was not afraid to speak her mind, but always in a respectful manner,” Board member Harry Hoe said.

Miller was a key supporter of the Levitt AMP Series since 2015 as it has grown into a major summer event in downtown Middlesboro. Along with helping with the necessary tasks each week to present the concerts, and even hosting some visiting Artists in her home, Joan offered her ideas and support to make the Series into a true asset for the community.

This week is the final concert of the Levitt concert series for 2022.

Performing this week is the visionary Austin, Texas combo, Los Coast, delivering a fresh blast of punchy psychedelic pop-soul, as well as effortlessly incorporating a wide range of genres. The band’s seamlessly soulful songcraft incorporates the band’s distinctive grooves along with the inventive compositions and commanding vocals of principal members Trey Privott and John Courtney.