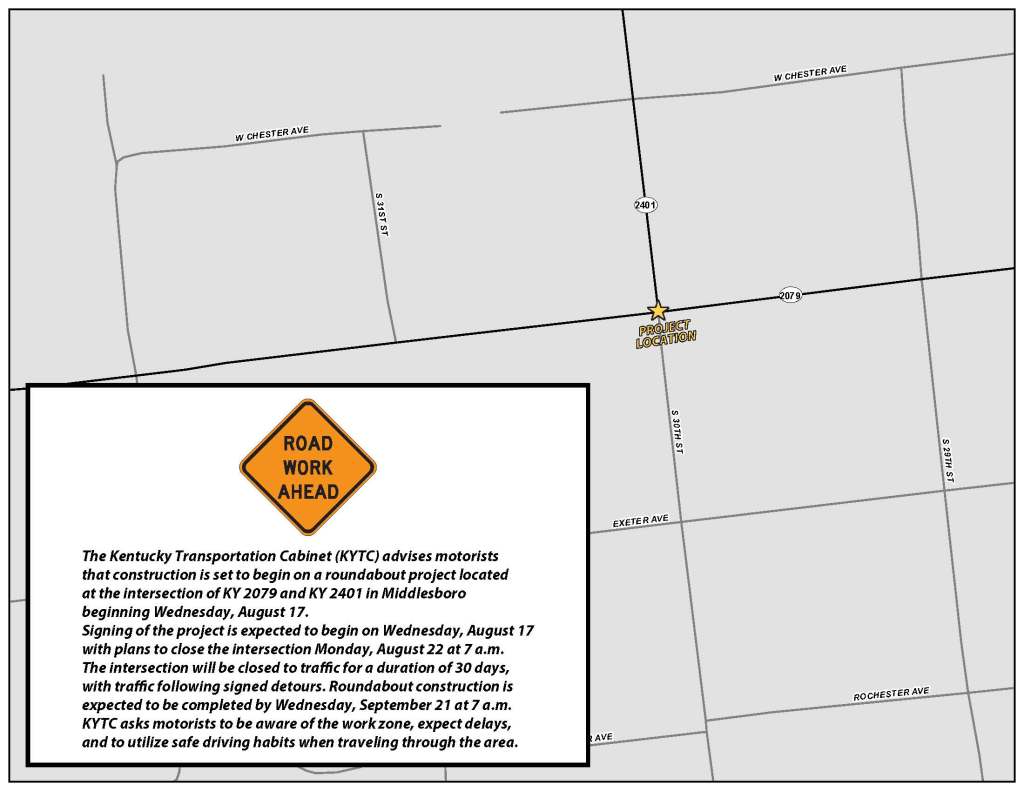 Roundabouts are a growing trend in infrastructure. In fact, a typical American response to roundabouts is that they are a European phenomenon that cannot and should not be implemented in the United States, because they are thought to be too difficult to navigate.

A new roundabout is coming to Middlesboro at Winchester and 30th, which is a state highway and a high-crash area, according to Kentucky Transportation Cabinet data. Construction began on the project Aug. 17.

The intersection will be closed through the duration of the project, which is scheduled for completion on Sept. 21.

Department of Highways District 11 Public Information Officer Les Dixon confirmed the project is part of a highway safety-improvement program intended to address the issue of vehicle crashes at the intersection. The project will utilize federal funding.

“We received word from the transportation cabinet that they had funding from Washington D.C., to do some safety projects in the area,” Nelson said. “One of the things they had been looking at was the traffic situation on Winchester and 30th Street.”

Nelson said the project is more complicated because it involves state-controlled roads.

“We’re going to be meeting with them to take a look at things,” Nelson said in a previous interview. “The big issue we have from the city’s point of view is there are a lot of very old sewer lines there. . . . We want to make sure we’re not getting stuck with something we might be financially liable for if something happens.”

Nelson said he has spoken with officials in London (Kentucky, not England) concerning a roundabout there, and was advised it has worked well.

“It handles things beautifully, even the big trucks,” Nelson said.

There has been talk previously of other remedies for the intersection, which has been the scene of multiple vehicle crashes.

The city will not be responsible for any funding for the project.

The date, time, and duration of work may be adjusted if inclement weather or other unforeseen delays occur. Motorists can access travel and traffic conditions at http://goky.ky.gov or contribute their reports at www.waze.com or via the Waze mobile application.