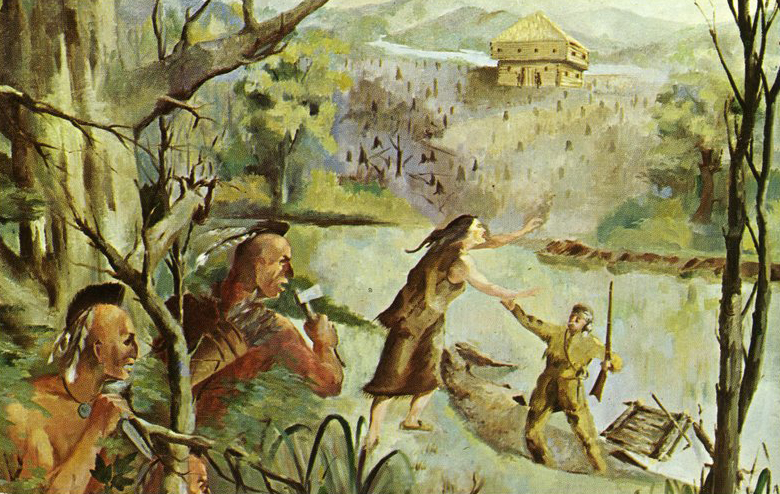 I want to preface this story about Jenny Wiley by saying that the 1700s was a time of violence between the Indians and the pioneers who passed through and settled on the lands in which they lived and hunted.

Jenny Wiley started out the door of their family cabin with her four children and her 15-year-old brother. It was just after dark and her husband, Tom, left early that morning for a distant trading post with mostly ginseng but a lesser quantity of other herbs that he hoped to exchange for winter provisions. He collected the herbs during the year. It was Oct. 1, 1789.

John Borders, her sister’s husband, stopped by earlier suggesting that she bring the kids and spend the night at their cabin as the Indians had been very troublesome of late and he heard hoots several times that day coming from the nearby woods.

“Jenny, that ain’t owls,” Borders said sternly. “That’s injuns! Aren’t you afraid to be here without Tom? I don’t think you and the kids should be here alone. Lizzie said for you to come and stay with us, at least until Tom gets back.”

Jenny guessed there was still a good half-hour before dark and she looked toward the loom her mother had given her. She tried to gauge the amount of work she wanted to complete before nightfall. Her father brought the loom from Pennsylvania to Walker’s Creek in what would later become Kentucky.

“Johnny, yes, yes,” Jenny answered. “We’ll come. Tom said he may not return until tomorrow and with this terrible rain, I believe it will be tomorrow. Let me finish with my cloth and we’ll be by right away.”

Jenny and the children felt some security in that John and Elizabeth Borders lived in a nearby cabin. The renowned Indian fighter Mathias Harman also lived only a short distance away. Although Jenny and Tom were expecting their fifth child it wasn’t due for several weeks.

It rained off and on throughout the day and when Jenny finished her weaving she noticed that nightfall had come early due to the heavy dark clouds.

“Hurry up, we’ve got to hurry along,” she said as she wrapped the baby.

Jenny removed the wooden bar from the door and when she pulled it open she was startled to be looking into the painted face of an Indian. Several warriors rushed into the open cabin making alarming unusual sounds as they moved.

Jenny screamed and the children cried out as the Indians methodically used their tomahawks to smash the skulls of her children with crunching blows. Jenny attempted to protect them but the warriors pushed her aside.

Jenny Wiley was pregnant and had her 15-month old baby in her arms making it difficult to keep up with the band of Indians as they pushed and goaded her along the dark mountain trail. The Indians had killed her brother and three of her children.

The Indian party was comprised of two Cherokees, three Shawnees, three Wyandots and three Delaware. In that era it wasn’t unusual for various tribes to band together as many had a resolve to drive the settlers from their hunting ground.

The Indians pushed, pulled, prodded and even carried her along for several days before an older Cherokee had enough of the delays. He grabbed the youngster from Jenny’s arms while she slept and dashed it against a tree, killing the baby instantly. Although devastated, Jenny knew that her only chance of survival was to keep her actions and emotions in check as much as she could.

Without her infant she was able to keep up with the Indians who sped along as they wanted to outdistance any pursuers. She thought about nightfall hoping that it would bring rest but when darkness came their movement through the wilderness continued. During the night Jenny heard the gushing of the Tug Fork of the Big Sandy River.

The following day they paused briefly and talked among themselves. Some of their talk centered around “Harman.” It came to Jenny that the Indians were referring to Mathias Harman, her neighbor. Harman was a well-known Indian fighter and Jenny determined that her captors raided her and Tom’s cabin believing it to be that of Mathias Harman. He lived near her and Tom.

The Indians mentioned the Harman name at the cabin and several times during their travel. Now they seemed to mention his name in fear of retaliation.

Editor’s note: Jenny Wiley is forced to bide her time and hopefully get an opportunity to escape in the continuation next week. His stories are both historical and nostalgic. Don’t miss a single issue. Thanks to Lincoln Memorial University, Alice Lloyd College and the Museum of Appalachia for their assistance.