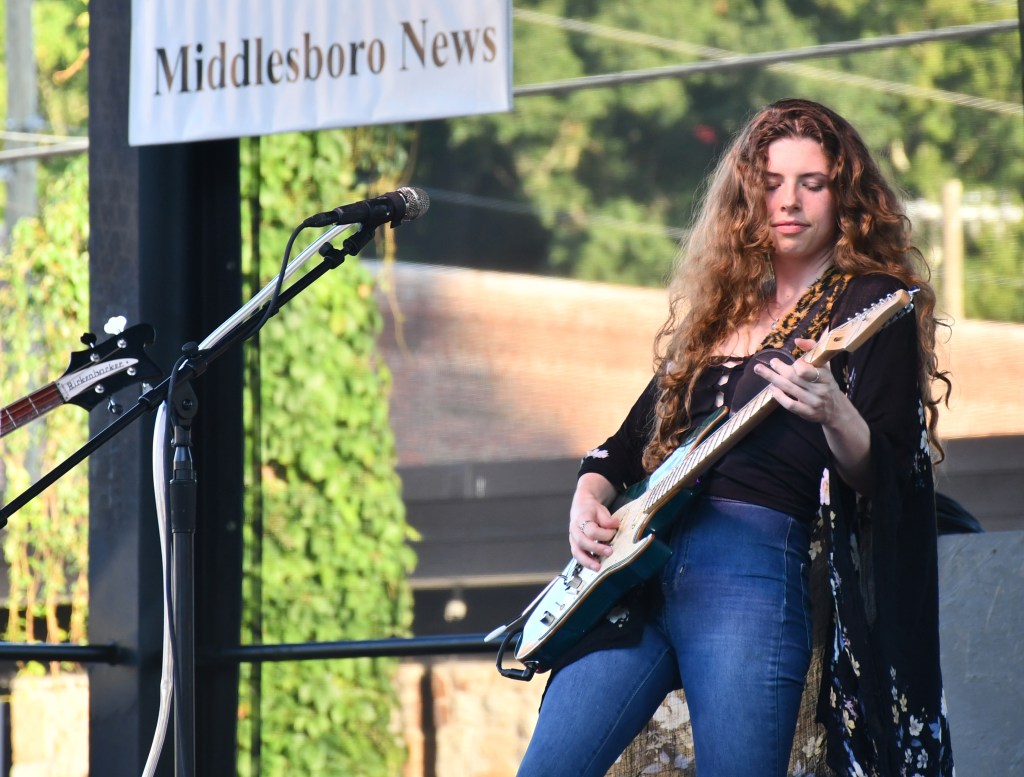 Hannah Wicklund at the Levitt Amp Concert in Middlesboro. Photo by Jordan Brooks

Hannah Wicklund was the featured act in Week 5 of the Levitt AMP Middlesboro Music Series.

The 21-year-old South Carolina-born artist has developed a powerful and sublime synthesis of skills. Now in Nashville, Wicklund, guitarist, pianist, singer and songwriter, is accompanied on stage by bass and drums. Her style on both guitar and vocals leans heavily towards classic and hard rock. Her first musical outing was at the front of Hannah Wicklund and The Steppin Stones, a musical group she formed at the age of 8. Outside of this group, she has found additional success both as a touring guitarist and solo act. Wicklund debuted her solo recording career in 2019, releasing two EPs and a single since then.

Wicklund’s performance was preceded by the Kudzu Killers! Originally from Harlan, the band lists their inspirations as everything from the Beatles to Bob Dylan to Hank Williams Jr., and many, many more. They play bluegrass, Americana, and folk music; the band likes to play a solid mix of different genres. They cover classic rock from artists like Tom Petty and Fleetwood Mac, but they get the biggest kick out of playing their original songs. For local folks, familiarity with the seemingly omnipotent plant kudzu is a given and natural fit for a band name. The Kudzu Killers have performed in numerous venues including the Kentucky Mountain Laurel Festival.

Downtown Middlesboro is still collecting flood-relief donations for Whitesburg with the Levitt AMP Whitesburg Music Series partner. During Week 4 of the Levitt series, singer Kelsey Waldon took donations for the flood victims mentioning her home was affected by the flooding saying “Kentucky is Kentucky,” expressing her sympathy for the flood victims. During Week 5 of the Levitt series, Smithfield Foods provided a community cookout with hamburgers, hotdogs, baked beans and chips. The cookout was free, but donations for flood relief are accepted.

One concert organizer, H. H. “Bo” Hoe, confirmed Levitt AMP Middlesboro will return for next year in 2023. The next concert, scheduled for Aug. 18, will feature a Levitt Foundation representative who will discuss the future of the concert series, Hoe said.

This week, channeling the sounds of Blues and Rock & Roll the quintet Magnolia Boulevard plays at the Middlesboro Levitt Amp concert venue. This years Levitt amp series can be seen every Thursday of the month until Sept. 15 at the Levitt concert venue located on 2005 Cumberland Avenue in Middlesboro.