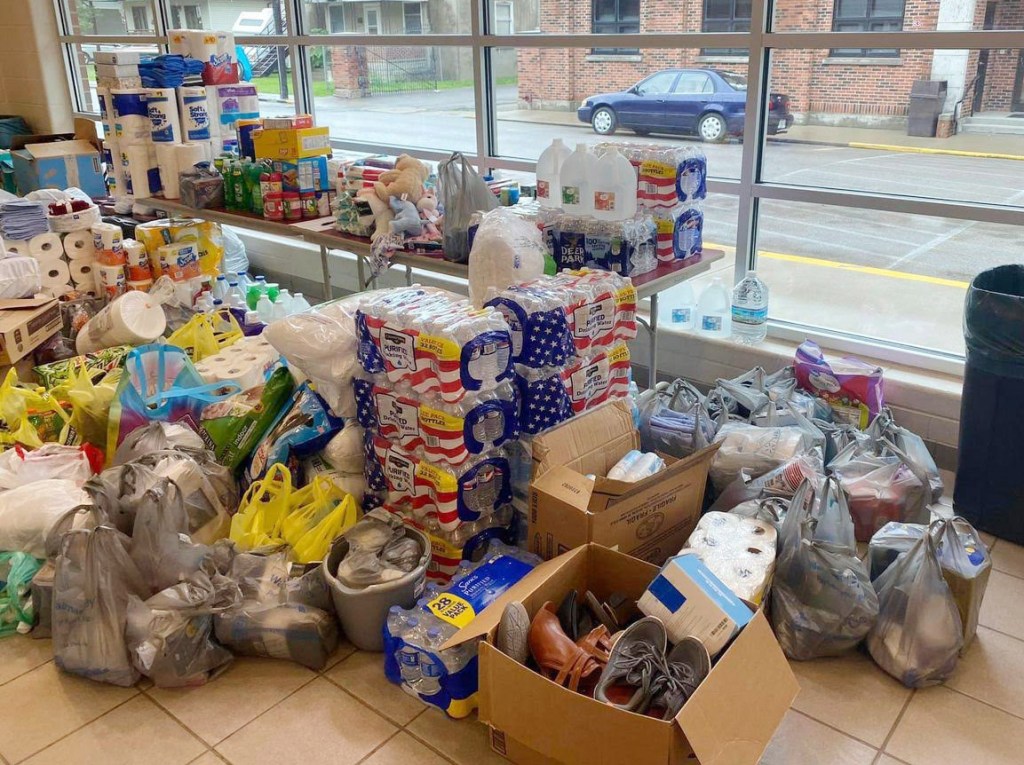 Volunteers from throughout Bell County donated, collected and distributed supplies to flood victims in other parts of eastern Kentucky. Photo by Jordan Brooks

The Middlesboro Police Department has been working with local businesses and schools to take up donations for recent flood victims. Officer Johnathan Kinner of Middlesboro Police and Trooper Shane Jacobs of Kentucky State Police inspired the donation effort, and there are still numerous locations across Bell County that are still accepting donations.

Pineville Independent School District collected donations for flood victims on July 30-Aug. 1 in the lobby of its new gym. Officials transported the items to local communities and schools affected by flooding. In addition, the Pineville volleyball team put care packages together from the donations specifically for the Buckhorn and Perry County areas. There were some items that were not able to be donated, according to superintendent of Pineville Schools, Russell Thompson, as “there was an abundance of clothes that were donated.” With the abundance of items, Pineville hosted a yard sale in the gym on Aug. 4, with all the proceeds donated to the flood victims.

Thompson stressed they are still taking donations. Please feel free to drop off any items you would like to donate in the lobby of the new gym of Pineville Independent, or to the school as they are still accepting certain donations. Thompson said they are still in need of “water, hygiene products, non-perishable foods, pillows, blankets, towels, washcloths, and baby products,” he said. “But every donation is still welcome.”

In the wake of the devastation caused by the recent flooding in eastern Kentucky, Food City is teaming up with WYMT-TV, WXYB-TV, Fox Tri-Cities, WJHL-TV, and ABC Tri-Cities to host a fundraising campaign to benefit flood-relief efforts. Food City has pledged a $25,000 contribution to kick off the drive.

“The lives of many of our friends and neighbors have been devastated by this tragic flooding and we certainly want to do everything possible to provide assistance during this critical time,” said Steven C. Smith, Food City president and Chief executive officer.

The campaign will run through Aug. 12 in all Kentucky and Tri-City and Food City locations. Customers can make donations at the checkout with 100% of the funds collected benefiting the Appalachian Kentucky Crisis Fund.

Other local businesses are working with the local police and Bell County cares as well, such as Tim Short of Middlesboro, Kroger, and Walmart. They are accepting canned food items, water and cleaning supplies.