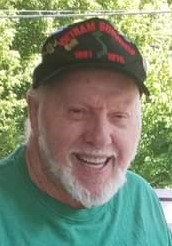 James Edward Wilson, 78, of Kettle Island, passed away on Saturday, August 6, 2022, at the Pineville
Community Health Center. He was born in Cubbage on July 12, 1944, a son of the late Oscar and Delta
Wilder Wilson. He proudly served in the United States Navy aboard the USS Ranger during the Vietnam
War. James worked as a Pineville Police Officer for many years and the worked at Pineville Utility as a
Repairman until he retired. He was a loving father figure for his granddaughter, Wynter.
In addition to his parents, he was preceded in death by his son, Jamie Wilson II; brothers and sisters,
Rhoda Pittman, Roy Miracle, Thurman Miracle, Ray Miracle, Jack Wilson, Matt Wilson and Clifford
Miracle.
James is survived by his wife, Dorothy Bailey Wilson; daughter, Chrystal Wilson; granddaughter, Wynter
Skye Wilson; sister, Katie Wilson; brother and sister-in-law, Orville and Hazel Miracle and a host of
nieces, nephews, relatives and many friends.
Graveside services will be on Monday, August 8, 2022, at 11:00 AM at the Wilson Cemetery in Kettle
Island. Military Honors will be presented. Pallbearers will be Andy Saylor, Bill Bailey and friends.
Arnett &amp; Steele Funeral Home and Cremation Center in Pineville is honored to serve the Wilson Family.
Light a candle of remembrance and sign the guest register at www.arnettsteele.com.