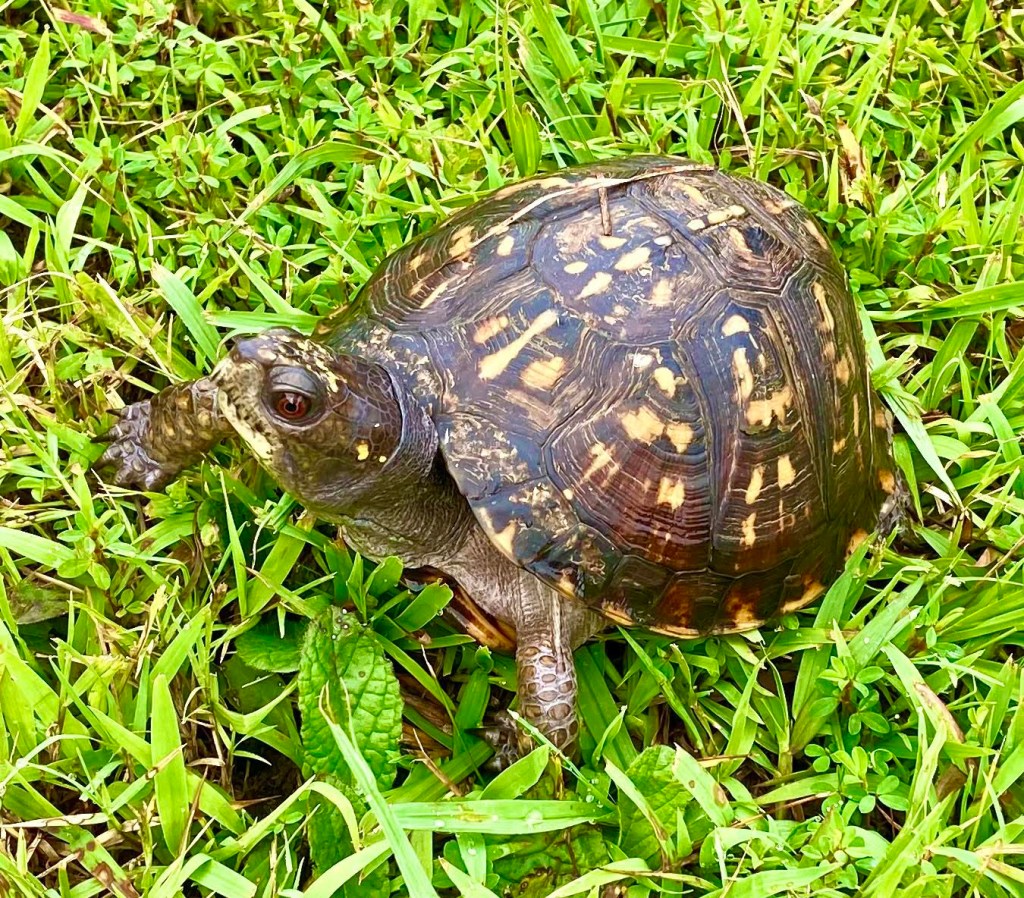 The eastern box turtle is common throughout Kentucky. Photo submitted

The way a turtle is put together is pretty much the reverse of ours. I mean look at it: we have soft body parts protecting a hard-inner skeleton. Turtles have a hard-outer skeleton protecting inner soft body parts. The most common turtle you’ll run into around here (and one you probably aggravated when you were a kid) is the eastern box turtle (Terrapene carolina).

The box turtle is also called a tarpin, terrapin or wood turtle. They have a high dome-like upper shell that can be black or brown with yellow, orange or olive blotches. The lower shell is unique compared with other turtles in that it is hinged so that when the turtle draws itself in, the lower shell folds tightly against the upper shell all the way around, completely; the turtle safely inside.

The lifestyle of the box turtle is slow and easy. The only animal that really does any harm is the human, mostly one in an automobile. Since they lack teeth, turtles must feed on soft foods such as worms, insects, mushrooms, and berries. They can survive for extended periods without food, but feed heavily when it is plentiful.

Although they are primarily land dwellers, box turtles like to soak themselves for hours in mud or water. During extended dry weather they will often burrow beneath logs and rotten vegetation and wait it out, then reappear in large numbers after a hard rain. They spend their winters this way as well.

The way to tell male box turtles from females is to look at the lower shell. If it has a small depression towards the rear, it is male. The purpose of the indention is to allow mating to take place, which can be tricky while wearing a domed suit of armor. Some claim that males have red eyes while females are brown, but I’m not sure this is dependable. After mating the female eventually digs a hole with her hind legs and lays white eggs in soft soil.

Box turtles are long-lived creatures compared to other animals, averaging 30 to 40 years.

Though not scientifically proven, there are reports of some exceeding 100 years, including one claimed to be have lived for 138 years, based on a date scratched on its shell.

Here are a few more interesting distinctions of box turtles: Unlike many other reptiles, box turtles have eyelids, which they close when sleeping of course, but also when they are happy.

I’m curious how they figured that one out. Because they lack a flexible ribcage (the shell is their version of ribs), they have to force air in and out of their lungs through movement of their limbs.

Their range of hearing is mostly in the low frequency range, which allows them to hear things like ground vibrations from movement of other animals, and also the location of nearby streams.

The individual plates that make up the shell (called scutes) grow by adding layers, and so have rings that can be counted to determine the turtle’s age. This won’t work with really old turtles because their growth eventually slows to the point that you can’t make out the rings.