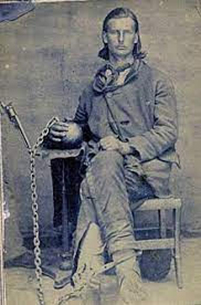 A chained bushwhacker captured after the Civil War. Photo submitted

The following letter was written by Richard Baldwin from Clarksville, Tennessee, on April 15, 1865. Baldwin, a native of Hancock County, Tennessee, left Sneedville following the Civil War because of the dangers to former soldiers who fought during the war. It was addressed to his brother Alfred who was still living in Hancock County. 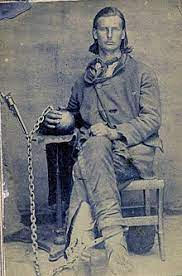 A chained bushwhacker captured after the Civil War. Photo submitted

“Dear Brother: I have long intended to try to get a letter to you but facilities are so imperfect that I hardly think worthwhile to attempt writing. I quit the service on the 12th of February (1865) and came here.

“I prefer it here to any other on several accounts. In the first place we have two railroads, one to Nashville sixty-five miles away and the other to Bowling Green. We also have water communications which are very superior. In fact, there is very seldom a time that a steamboat is not in sight (on the Cumberland River).

“Another reason is my wife has a sister whose husband is a great advantage to me. I have commenced business here with a capital of nearly four thousand dollars. I have a permit for goods and my brother-in-law will buy my stock in Cincinnati next week. He, Mr. Nixon, is a merchant.

“I have rented me a little house and have just got into it. It has four rooms and my little wife likes how we’re getting started here very well.

I don’t know how long I will stay here.

“I prefer living in the country when times get so I can do so in safety.

All the soldiers are getting back from the war. There in Hancock a lot of them think the war’s still going. It’s stupid that some of them will lay in the bushes and ambush someone riding by on their horse or walking by.

“Down here they call it bushwhacking I don’t know when this will ever end.

“When it does chances are my little sweetie and I will come back to Hancock County. I miss the mountains and the family but I hate the shooting. If they don’t get put in jail chances are they’ll have a much worse punishment after they die.

“The last time I heard from any of you was a letter I got from Lizzie last June. I would like for you to come and see me if you can. I would come there if I thought it was not dangerous but as I have escaped this long. I want to live on for I feel now that I have something more to live for than I ever had before.

“I intend to come and see you all when times get better but I never expect to live there anymore. I suppose you have heard all about my marriage long since. So there is no use of saying anything about that. If I knew you would get this letter I would send you my wife’s and my own photograph. I will send them if you will mention a medium who will accept them and then turn them over to you.

“I was in Washington three weeks ago. I stayed there two weeks and had an interview with President Lincoln. I like him better and better. I think he is as good a man as there is in the world but I think Andrew (Vice-President) Johnson comes nearer combining all the essential qualities that would constitute the best and greatest man that lives.

“We have an official report here this morning that Mr. Lincoln was assassinated last night in Ford’s Theatre in Washington and mortally wounded from a pistol shot. I hope it may be false.”

The remainder of the letter is lost, probably forever. His admiration of Andrew Johnson is certainly noteworthy as on the very day the letter was written Johnson succeeded Lincoln as the 17th president of the United States.

This was a time when the western United States was still sparsely populated in many areas. Many of the sons and daughters of Kentucky, Tennessee and Virginia were moving westward. Natives of the area fought on both sides during the war and there was much hostility even after returning home. The courthouse files of many Civil War veterans were initialed GTT for “gone to Texas,” although many went to Oklahoma, Missouri, Kansas or other states.

In 1871, Alfred, the brother to whom the letter was written, built a flatboat and loaded his family, horses and possessions. Then they floated down the Clinch and Tennessee Rivers to Paducah, Kentucky.

There they loaded onto a wagon and proceeded to Missouri where they settled.

Alfred’s route took his family near Clarksville, Tennessee, where his brother Richard, lived. I suspect he took advantage of the opportunity to stop in Clarksville to visit Richard for this last time and to meet his little wife.

*Jadon Gibson is a freelance writer from Harrogate, Tennessee. His stories are both historic and nostalgic in nature. Thanks to Lincoln Memorial University, Alice Lloyd College and the Museum of Appalachia for their assistance.