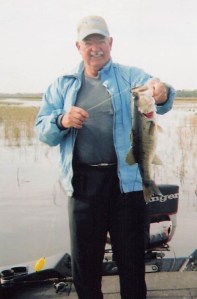 Jimmy Doff “Bugs” Evans, age 78, passed away on Sunday, June 12, 2022, after a long battle with Parkinson’s disease. He was saved and baptized at an early age but had rededicated his life on June 14, 2015 and was a member of Pump Springs Baptist Church. He was born in Chenoa, the son of James M. Evans and Bertha Head Evans, both deceased. He was also preceded in death by his sister, Linda Miracle.

He was enlisted in the US Army, SFC E-7 stationed out of Barbourville KY, 149th infantry division and was an expert in rifle and machine gun operation.  He stayed connected thru the National Guard for many years.  He was a dedicated soldier who loved his country.

He was involved in the racing circuit well as Nascar.  He had many acquaintances and friends in this part of his life.  He once was able to be included in the pit crew for Cale Yarborough. Jim had worked at Dixie Engine Service for many years.  When he was diagnosed with Parkinson’s disease, he had to retire.   He enjoyed golf as well and had started as a caddy at the Middlesboro County Club.  He later had a total of 11 holes in one, as well as two of those achieved on the same day on his home course in Middlesboro, KY.

Jimmy loved to fish, day, night, weekend, rain, or snow.  As a matter of fact, on our first wedding anniversary he surprised me with a weekend getaway to Alabama, to fish.  It was great!!  We went on several fishing trips to Florida with Bill and Toni.   He had taken me on many of his adventures and we have had some wonderful times and I will miss him dearly.

Jimmy is survived by his wife of 28 years, Brenda (King) Evans. They have been together 42 years and have lived in KY and TN, but now they reside in Virginia.   He is also survived by his Children, Jon Doff Evans, and Jason Evans, both of Pineville, KY; Siblings, Ruth (Dr. John) Irby of Babson Park, Florida, Carson (Nancy) Evans of Middlesboro, KY, and Mary Alice (Buford) Powell of Revana, KY.

He was a wonderful husband, brother, son, uncle (Uncle Bobby) and friend.  He also had several nieces and nephews, who were very dear to him and he loved spending time with them.  Anyone who knew Jim, knew Courtney and Chelsea. Then there was Chely, (daughter of his fishing buddy, Eddie) and Emily. Also Kandice, Matt and Chris. He loved taking them to the zoo and on one trip, he even rode the elephant with Courtney because he wouldn’t let her ride it by herself.

I just can’t say enough about Jim, but if you knew him, you knew.  He will be missed so much, by so many.  Until we meet again.

Register book and online condolence are available at www.cawoodfh.com

Cawood Funeral Home, Middlesboro, Kentucky, was in charge of all arrangements.