Deaths in Kentucky by alcohol, drugs, suicide skyrocketed during pandemic 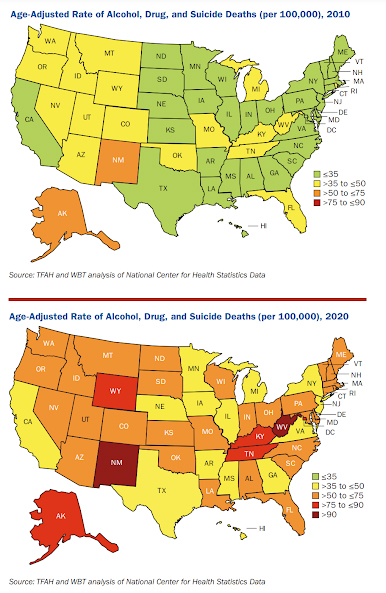 In the first year of the pandemic, the United States experienced the highest-ever combined rates of deaths due to alcohol, drugs and suicide, and Kentucky’s rate was second in the nation, according to a report released by Trust for America’s Health and Well Being Trust.

Nationwide, deaths associated with alcohol, drugs and suicide, called “deaths of despair,” took the lives of 186,763 Americans in 2020, a 20 percent increase from 2019. It included the highest number of substance-misuse deaths ever recorded for a single year, according to the report.

Kentucky’s combined deaths of despair increased 36% between 2019 and 2020, the second only to West Virginia, which had a 37% increase.

“With the trends continuing to go in the wrong direction we must ask ourselves, what will it take to move to robust and comprehensive action? The story behind these data is beyond devastating and heartbreaking to those families who have suffered loss,” Dr. Benjamin F. Miller, president, of Well Being Trust, said in the release.

The release notes that while deaths of despair have increased for decades, the national increase in 2020 was unprecedented and driven by a 30% increase in drug-induced deaths and a 27% increase in those related to alcohol.

According to the report authors and other experts, the 2020 increase in alcohol and drug deaths was exacerbated by: the rise in synthetic opioid and psychostimulant overdoses, disruptions to recovery and treatment programs, and the financial hardships many individuals and families experienced during the Covid-19 pandemic.

The report offers detailed recommendations for local, state and federal governments to take to reverse this crisis, including ways to invest in programs that promote and prevent substance misuse and suicide, programs and policies that address substance misuse and overdoses, and ways to increase access and ensuring parity for  mental health and substance use disorder treatment, all while working to decrease stigma.

The report also examines the last two decades of the drug overdose crisis, including an analysis of the underlying causes and policy responses, with a  call to rethink strategies to match the crisis. It also includes an interview with Sam Quinones, author of two acclaimed books on the opioid crisis, about the need to heal communities in order to deal with the addiction crisis.