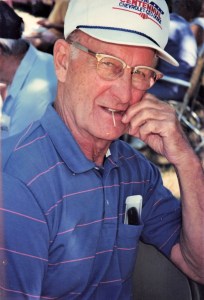 James “Jim” Garfield Prater, age 96, of Middlesboro, KY, passed away on Thursday, June 23, 2022, at the Middlesboro Nursing and Rehab Facility in Middlesboro, KY. He was born May 6, 1926, in Balkan, KY; the son of the late Roscoe Truman Prater and Rosa Lee Brown.

Jim was a member of Hensley’s Chapel Baptist Church and was a WWII veteran of the United States Naval Service. He had also been an electrician at Giles Industry during his working years.

He is survived by the following members of his family; brother, Charles Prater; sisters, Lavanda Sue Carroll and Elizabeth Ann Cunningham; several nieces, nephews, other relatives and friends.

The family would like to thank the staff at the Middlesboro Nursing and Rehab Facility for the wonderful care and love shown to Jim over the past years.

The family will receive friends from 11:00 a.m. to 12:00 noon, on Saturday, June 25, 2022, at the Cawood Funeral Home Chapel. Graveside services will immediately follow at the Balkan Cemetery in Balkan, KY, with Rev. Derick Cunningham presiding. Family and friends will meet at the cemetery.

Cawood Funeral Home, Middlesboro, KY, is in charge of all arrangements.