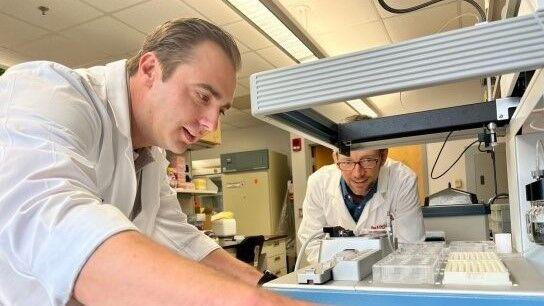 LOUISVILLE – The University of Louisville has received a $3.6 million grant from the National Institutes of Health and the U.S. Food and Drug Administration to study the effects of flavorings like mango and bubblegum used in vapes and electronic cigarettes.

Researchers at UofL’s Christina Lee Brown Envirome Institute, which recently opened in the school’s New Vision of Health campus in downtown Louisville, hope to better understand the short-and long-term impacts of these flavorings–specifically on the heart–and catalog which are potentially harmful.

“E-cigarettes are still relatively new, and we don’t yet fully understand what their health effects are,” said Alex Carll, an assistant professor in the Department of Physiology and co-lead on the project.  “Understanding this could help us make better purchasing and regulatory decisions.”

The FDA has banned unauthorized flavors used in disposable e-cigarette cartridges, saying some could appeal to kids and help fuel rising rates of youth vaping.  However, a wide variety of flavors are still available in liquid form.

Matthew Nystoriak, an associate professor of medicine and co-lead on the project, said some flavors may seem harmless because they taste like or use the same ingredients as in food. But while those ingredients are safe to eat, they may not be safe to inhale.

Some flavors used in vapes, like cinnamon or diacetyl (artificial butter flavoring), have been linked to serious and even deadly health conditions like cell death and “popcorn lung”, damage caused by airway inflammation.

“Our goal is to understand how individual flavoring chemicals impact the heart,” Nystoriak said. “There are many flavor chemicals used in e-cigarettes and if we know which are potentially more harmful than others, it’s possible for people to make more informed decisions about which products they use.”

Identifying their biological effects also is likely to help the FDA in regulating flavoring additives in e-cigarettes in the future.