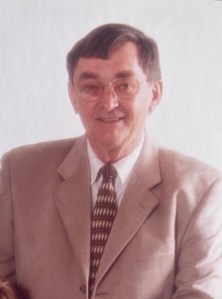 Emanuel H. (Doc) Rader of Pineville passed away peacefully May 25, 2022, surrounded by family.
He was preceded in death by his parents Henry Clay Rader and Martha Fields Rader; sisters, Mary Susan Spencer, Martha Frances Duncan, and Cora Duncan; brothers Abraham Rader and Bill Rader; and son Gregory Neil (Greg) Rader.
Emanuel was born October 30, 1937 in Duck Fork, Owsley County, Kentucky.  He excelled in school, winning a bible for memorizing over 300 New Testament verses, and deciding in elementary school that he wanted to be a doctor, after seeing his brother come home with a shiny cast and a sucker after breaking his leg. He graduated high school at age 16.  (He would have graduated at 15, but he went back a year when he couldn’t figure out how to work his high school locker.) Despite his young age, he managed to join the army, where he served for three years, before being accepted to Berea College, where he worked as a barber and in the dairy to finance his education.  Emanuel was awarded a scholarship to attend the University of Kentucky Medical School, graduating in 1967, only after taking a semester off to run moonshine, to pay for his father’s cancer surgery.  He used the money from the Army GI Bill to build his parents a house.  After medical school he completed his internship at St. Joseph Infirmary in Louisville.
Doc set up practice in Pineville, July 1, 1968 as a family physician, treating patients from birth to grave.  He delivered countless babies and saw thousands of patients, only missing one day of work in 40 years of practice. Emanuel was active in his community, serving as the long-time chair of the Bell County Republican Party, Trustee and Executive Committee member with the Kentucky Medical Association (KMA), President of the Bell County Medical Society, member of the Kentucky Educational Medical Political Action Committee (KEMPAC), various roles on the board of Pineville Community Hospital and Chief of Staff, and as Chairman of the Bell County Health Board, where he helped secure funding for the new Health Department. He established the Frakes Clinic and the school nurse program, which placed one RN in every school in Bell County. Doc also served as a faculty member for the University of Kentucky Family Practice and Allied Health Professions and an instructor for their Physicians Assistant Program.  He was awarded the Pineville Rotary Club’s Man of the Year in 1999.
Doc had a passion for sports, coaching men’s, women’s and Little League Softball, from the Raiders, to the Raiderettes, to Doc’s Girls, to the Peaches, and he enjoyed thoroughbred racing and handicapping, owning stake in several horses.  He loved serving as team doctor for both Pineville and Bell County, but was especially proud of his Bobcat State Championship ring.
After a long and busy career, Doc retired in 2008 and spent most of his time at his favorite getaway, Norris Lake, where he spent well-earned quality time with family, playing cards and beating everyone in Rummy and Rook. He was brought great joy in his final years by his three youngest grandchildren, his “Sugarpoppy” Carrigan Tulloss, his namesake Keene Emanuel Wilson, and his Princess Lakelynn Wilson.
He is survived by his loving wife of 47 years, Sherwin (Williams) Rader; children, Stephen (Steve) Rader, Celena Tulloss (Scott), and Tasia Wilson (Joey); nine grandchildren; brother, Henry Clay Rader (Gloria); and sisters, Lucy M. Sharp, Leeova Barrow, and Cathy Phipps.
The Rader family would like to give special thanks to Dr. Shawn Fugate, Sarah Mills PA, and the entire staff of Barbourville Health and Rehabilitation Center.