National Nursing Home week was established in 1967 to celebrate the roles that nurses play in caring for seniors. Each nursing home can choose their theme, and this year the facility chose The Golden Age of Hollywood during the 50s and 60s. The staff put up decorations to bring the facility to life. From the Wizard of Oz to the wild west, residents were able to go back in time. “We had a movie night with the Wizard of Oz and were doing an awards ceremony for the employees and residents.” Saylor added that Elvis, Marilyn Monroe and a magician came to meet the residents and perform. “It involves a lot of food, a lot of different entertainers and they enjoy themselves. The residents, a lot of them have said this has been the best time.”

The residents were involved in many activities throughout the day, including meals that corresponded with the theme. “We had a campfire [in the courtyard] like they would have done back then,” Saylor said. “We had a fire pit for hot dogs and s’mores.” Crafts were made, some participated in karaoke and a big bingo extravaganza. “It’s been a real eventful week, and they’ve enjoyed every bit of it.” Saylor added that it means just as much to the staff, seeing them enjoy the week, as is does the residents.

This year was the first year since the pandemic began that the nursing home was able to bring in entertainers and churches. “We made the best of and it was still good; they love the entertainers to come in and the churches.” She said they had a church revival out in the courtyard where they had drums and guitars along with a big cookout.

“The whole facility comes together to make it happen; it takes everybody. I couldn’t ask for better help,” Saylor said. 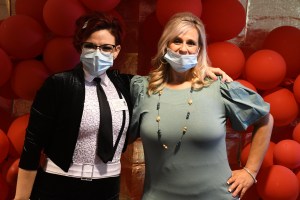