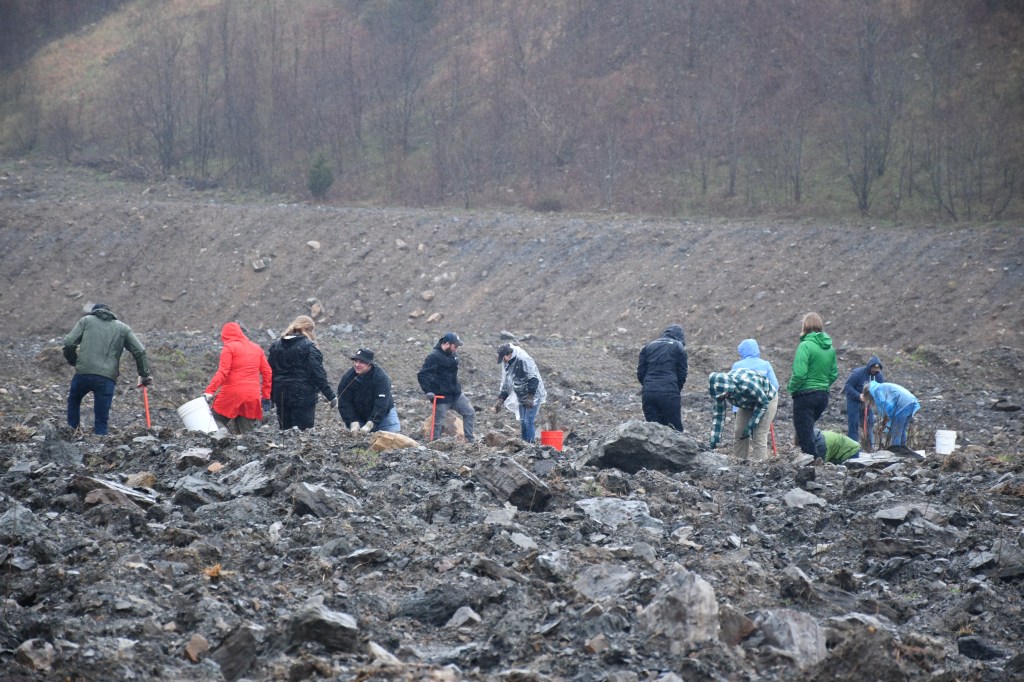 75 volunteers from Beam Suntory planted 6,800 trees in the former mine lands of Bell County. -Photo by Elizabeth Manning

On April 12, the Nature Conservancy of Kentucky (TNC) partnered with Green Forest Works and Beam Suntory to plant 6,800 trees in the former land mines of Bell County in two days.

In 2019, TNC bought 253,000 acres of land in Kentucky, Tennessee and Virginia for a project known as the Cumberland Forest Project. Danna Baxley, Director of Conservation for TNC, says one of their initiatives are to reforest areas where forests once were. “Our vision is to build a resilient and connective forested network throughout the Appalachian mountains from the blue ridge mountains south of us all the way up in to the Boreal forest of Canada and some of the largest gaps in that protective network are right here in Kentucky.” 55 acres of the 253,000 are here in Kentucky. 75 volunteers from Beam Suntory planted a mix of short leaf pine and white oak. Baxley says that both of these species are native, great for wildlife and will be close to what their natural state would have been before the mine site was formed. In 30 to 40 years, people will not be able to tell that this area was a mine site. “We want to create high quality habitats for wildlife and people to enjoy so reforesting is a big part of that, we want these systems to be back in their natural state.”

Beam Suntory is a company that produces alcoholic beverages and has offices and distilleries worldwide. Kim Marotta is the Global Vice President of Environmental Sustainability and says the white oak is very important to their company because it helps make their bourbon barrels. “We have a commitment that by 2040 we will replant more white oak than we use to produce our barrels.” She says that their goal for 2022 is to plant at least 125,000 trees and they aim to plant 75,000 in the area with TNC and Green Forest Work. “One of our focus areas is all about forests and replanting healthy, sustainable, resilient forests and this is one key area and one opportunity for us to make a difference.” 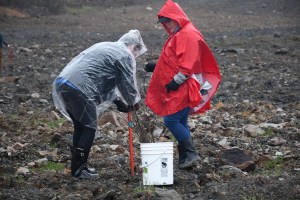 The Nature Conservancy, along with Green Forest Work, has already planted 100,000 trees on a 100-acre tract. -Photo by Elizabeth Manning

Dr. Chris Barton, President and Founder of Green Forests Work says they focus their work on reforesting old coal mines sites that were generally forested prior. “This seemed like a really good project location because it’s in the Cumberland Plateau and there’s a couple of initiatives going on in our state to restore both short leaf pine and white oak in the Cumberland Plateau and so this is a perfect site to meet both of those goals.” He says they planted 90 acres with professional tree planters and set aside 10 acres for the volunteers. They also plan to plant dogwood, cherry, hickory and other trees that are common in the area that would have been there prior to the mining. “We over plant a little bit but we also see with this land ripped up and plowed like it is, it gives an opportunity for wind to blow native seed in and birds to drop seed and things like that so you see not only the trees that were planting come along but you also see natural succession.” He says that the trees on the mine site grow statically  similar to those in a non mine site.

Those who are interested in becoming involved in projects like this can follow the TNC Facebook page at The Nature Conservancy in Kentucky for future volunteer events or contact the Lexington Office at (859) 259-9655. TNC will be returning to Bell County this summer for solar instillation into the community center. People can learn more about their work, donate or become a member of TNC at nature.org/kentucky.

A new life in the Gap