A new life in the Gap 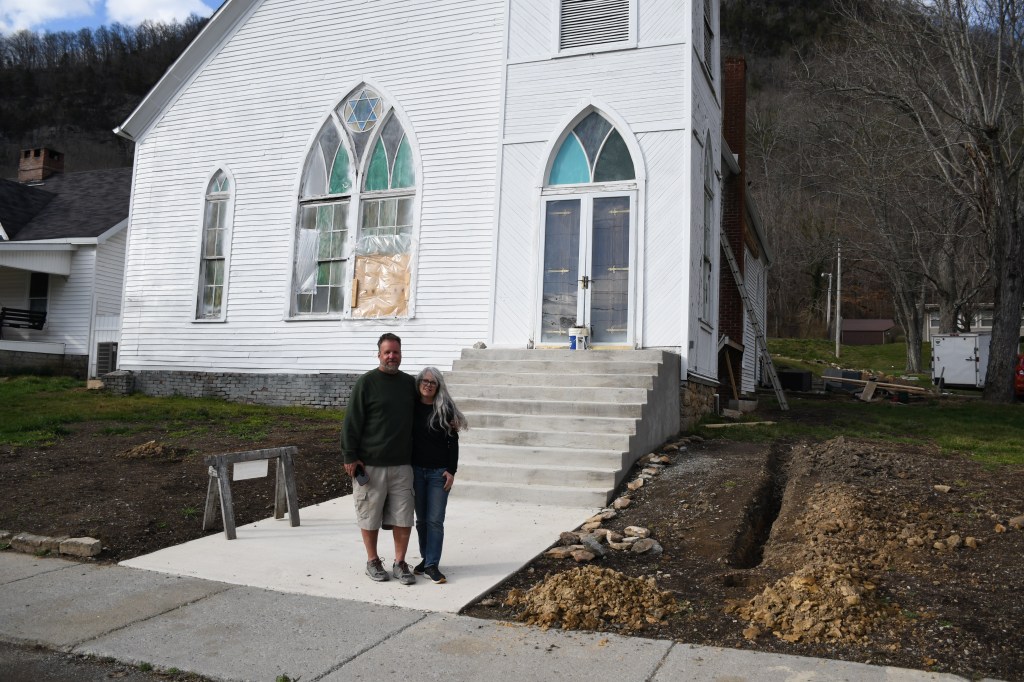 Bill and Tammy Linn will be holding the Grand Opening for The Olde Church in Cumberland Gap on April 30. -Photo by Elizabeth Manning

The Olde Church in Cumberland Gap will be holding their Grand Opening on April 30.

After losing their 20-year-old son four years ago, Bill and Tammy Linn left Portland, Oregon, and sold their home and business for a year of traveling. “Part of being here, going to do something different and just get away from it all, it’s not therapy because it’s our life, but we definitely needed a change in life to get grounded again”, says Mr. Linn. Bill and Tammy stumbled upon the old church in the Gap. “48 hours later we made a cash offer and they accepted it”, says Mr. Linn.  The Linn’s then decided to travel back to Portland to gather their tools to begin the restoration process.

Mr. Linn says that this is not their job, they just have a passion to do this. “First thing we did, we had to get permits obviously, we got an engineer out of Kingsport, Tennessee who specializes in old buildings and we were able to get permits and plans in six weeks which is near impossible” says Mr. Linn. After cleaning up the abandoned church and property for two months, the Linn’s began their work. He says it took them three months to make the church parsonage livable. During this time, Tammy Linn was made aware by her aunt that one quarter of her family is from Bell County. “I had no idea, absolutely no idea until she pulled those letters out”, says Mrs. Linn. Mr. Linn says that as far as he is concerned, his wife is home.

The Linn’s have done all of the work themselves except for the plumbing, electric and the roof. During the foundation process, the Linn’s found so much damage that they had to basically redo the whole foundation. “Three to five years from now, a good wind storm with the damage that was going on with the termites and the water, it would have taken a damage hit that may have put it beyond repair” says Mr. Linn. Due to the age and damage of the building, they went eight month without insurance.

In order to be a commercial building, it has to be full ADA. “We’re doing two bathrooms, the code is one but we’re doing two and the reason is as a community center, we’re definitely going to get the older crowd here so walkers and things like that are important to us. But the more important thing is, you’re wearing your wedding dress and you have to go to the bathroom, our bathrooms are big enough that you can take two of your bridesmaids in” says Mr. Linn. They will also have a fully licensed caterers kitchen that has everything but the oven. 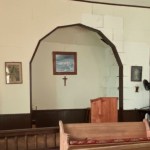 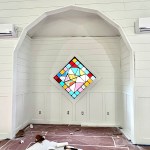 After! This window has been covered for the past 97 years. Mr. Linn says that is is one of the many gifts the building has given them. -Photos submitted by Bill Linn

During the restoration process, the Linn’s uncovered a window that had been hidden for 97 years.”Now that it’s open, if it’s a sunny day we’ve got this God light right here thats just absolutely stunning”, says Mr. Linn. They said between the wall and the window, they found a newspaper from 1924 and have yet to figure out why it was originally covered. They have also discovered many different items such as tobacco tags, little trinkets, a civil war bayonet and original advertisements for Berkau Park. Each window in the building is an original that has been completely restored. With the building having damage, they manage to keep parts like the ceiling, the wooden ties and windows original. In the church, there is a counter top that is a 300 year old piece of wood that was just cleaned up and made natural. During the process, they tried to keep as much of the building as original as they could to keep the living history. Once the church it finished, they will begin restoring the church parsonage and turn it into an Air B&B but for weddings, the bride can rent it our for her and her bridesmaids.

The Linn’s not only thought of a wedding venue for the church, but thought of ways the community can be involved. They plan to make the church a place for birthday parties, graduations, and memorials along with organizations such as Guardians of the Gap and a back up for rained out events.  He will also be opening it up for the recovery community. “Using this for the purposes of the community, it really was the community. It’s their prayers that kept it up for so long, we just did the hard work.” In the church garden, they will be offering memorial stones that people can buy to place there, their son will have memorial stone placed. They plan to keep the gardens open to the community as well.

The Linn’s will be holding the Grand Opening for the Olde Church in Cumberland Gap on April 30 at 10:30 a.m.