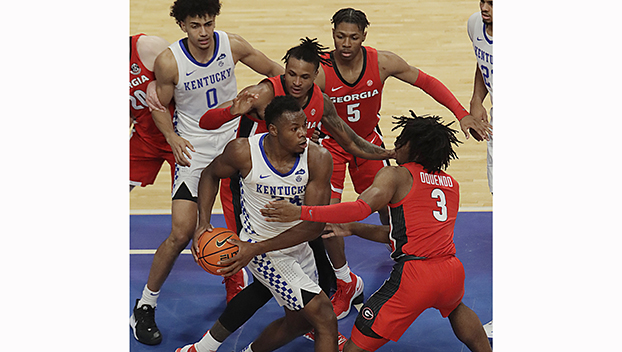 Kentucky big man Oscar Tshiebwe brings a unique talent to score and rebound. He was the first UK player to have at least 29 points and 17 rebounds in a game since Jamal Mashburn had 38 points and 19 rebounds against Eastern Kentucky in 1992. - Photo by Jeff Moreland

Oscar Tshiebwe had a season to remember and is having an equally memorable off-season.

The Kentucky junior forward has received numerous post-season honors following a stellar first season with the Wildcats. On Sunday he was awarded the prestigious Naismith Trophy, given to the best player in the nation by the Naismith Memorial Hall of Fame. Just add it to the player of the year collection that seemingly is growing by the day. The season and accolades that have followed Tshiebwe are remarkable.

Tshiebwe and Anthony Davis are the only Kentucky players to win the Naismith award. Davis won a decade ago when he was leading the Cats to the national championship in 2012, in his only season as a Wildcat.

Tshiebwe, in his only season with Kentucky (so far), was an easy choice as college basketball’s best player. He averaged a double-double with 17.4 points and 15.2 rebounds per game and produced numbers Big Blue Nation hasn’t witnessed since Dan Issel roamed the court at Memorial Coliseum.

Some of us, including yours truly, weren’t even talking or walking when Issel played for the Wildcats in 1970. Getting the opportunity to watch and cover a player like Tshiebwe from a throwback era was refreshing, considering the glamour of 3-pointers that seemingly are more attractive than the old-fashioned three-point play or even the basic fundamental passes that result in jaw-dropping plays and slam-dunk finishes underneath the basket.

On media day in October, long before the entire nation knew about Tshiebwe, his glowing smile and positive energy revealed that Kentucky had a special player on its roster. He won over the media that day. On the court, Tshiebwe was a silent warrior and a beast without an attitude who knew nothing but just to fight for everything on the court, whether it was rebounding, scoring or playing defense. By the way, he led the Wildcats in points, rebounds, and steals, too.

He wasn’t interested in shooting a 3-pointer, never launching even one the entire season because he was consumed with being the best rebounder in the country. Tshiebwe succeeded and even routinely made it look easy.

What makes Tshiebwe such a unique talent is that nothing has ever came easy for him in life. He totally relies on his faith in God and belief in Jesus no matter the circumstances. He wasn’t raised with everything handed to him and his family had to fight for everything, just as he displayed on the court this season.

Along with the recognition comes a decision Tshiebwe will have to eventually make soon, whether to declare for the NBA Draft or return for a second season with the Wildcats. Many times, those life-changing decisions are based on money, but for Tshiebwe, it will ultimately be a decision made by his maker.

“I’ve been praying about it and I know I have a big decision to make,” he told CBS Sports. “It’s up to God and (he’ll) help me with (it) and that’s what (decision) I’m going to make. It would get to be in the blue again because I love the place, I love the fans and love everything about Kentucky, but whatever decision God has told me to do, that’s what I’m going to do.”

In the end, Kentucky wasn’t the best team in the country, although it defeated national champion Kansas and runner-up North Carolina easily during the regular season. This much is for sure: The Wildcats had the best player in the country in the unforgettable Oscar Tshiebwe.