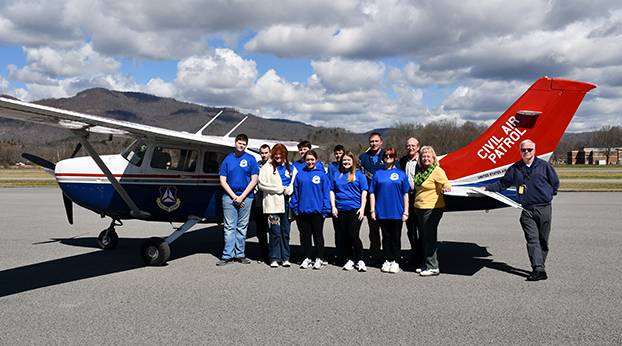 The future may be looking up, way up, for some Bell County High School students.

Each Thursday for the next three weeks, Senior Aerospace Science Instructor Master Sgt. James Browning will be bringing eight cadets to learn about aviation. The Civil Air Patrol is doing orientation flights for the cadets, and they have units all throughout Kentucky flying their own planes to help the cadets.

Two cadets go up in the plane at a time and learn how the plane operates and even get to take control of the flight. The pilot takes them from the airport and makes a loop into Virginia, then goes south of Harlan and back toward Pineville on a roughly 25-mile loop.

“I really enjoyed it, it was nice,” said freshman Cayden Jones. 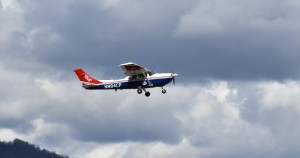 Cadets were able to go up in the plane and even take control of the flight. – Photo by Elizabeth Manning

Browning said he’s unsure if his cadets are interested in taking the aviation route as a career, but this provides them an opportunity to explore their options.

“Freshmen and sophomores are just trying to figure life out in general, so this is just another opportunity for us to expose them to something different that they might not otherwise be able to try if they’re not in ROTC,” Browning said. He added that in previous years, his cadets were able to go to McGhee Tyson in Tennessee and tour the Air National Guard Base and a KC-135. He hopes that after this program, some of his cadets will be interested in aviation and more students will be interested in ROTC.

“It’s enjoyable because hopefully were introducing the cadets to aviation, and then at some point they’re going to further go on and do something in aviation – become pilots, join the military perhaps, or one of the armed services or learn to fly,” Browning said.

Mark Beauchamp has been a pilot for 35 years and has been doing this program for a few years now. He said he received an email from one of his first students saying that he was now flying a KC-135 aerial refueler for the Air Force.

“He was a high school student when I taught him solo, ever since then he’s been with the Air Force,” Beauchamp said.

Airport Board Chairman Glynna Brown said there is more to aviation than just flying. She says mechanics is another route students can take in the field, adding that it requires a special mechanics license to work on an airplane.

“This is a wonderful opportunity for these young people, to have the experience of learning to manipulate the controls of an airplane. This is their first time and I’m sure they’re excited, and we’re excited for them,” Brown said.

Brown added that they have about 40 airplanes and approximately 30 businesses use the airport on a regular basis.

“[This program] really introduces them to the airport here in Middlesboro. A lot of people don’t know the airport’s here,” said board member Kirby Smith.

Browning said his cadets will be heading to Dayton, Ohio, in three weeks to tour the National Museum of the U.S. Air Force at Wright-Patterson Air Force Base.

“A lot of the things we do, we do because we do it for recruiting purposes to get kids into our program so we can have an impact on their lives,” Browning said, adding that it doesn’t matter if they choose to become a pilot or a business leader, he doesn’t push one thing or the other. He wants his cadets to be exposed to many opportunities and prepare them for life after high school.