Sharing their message
Crater of Hope gives presentation at MHS 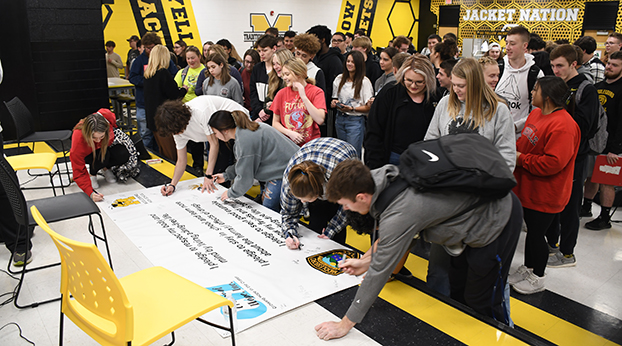 Students sign a banner to pledge against drug and alcohol use. - Photo by Elizabeth Manning

On March 15, members of Crater of Hope gave a presentation on drug and alcohol abuse at Middlesboro High School.

MHS has partnered with Crater of Hope to come and give junior and senior students information about drug and alcohol abuse. Crater of Hope seeks to make an impact on the students during these presentations so addiction will not be a part of their future. Executive Director Jeannie Allen started by letting the students know that their presentation was not a lecture, but to let them know that Crater of Hope wants to help. Pamphlets were on each student’s table so they could take a list of resources home with them. Members April Wallace and Sgt. Jeremiah Johnson gave testimonies on how drug addiction affected their life when they were growing up. Wallace is currently a recovering drug addict.

Sgt. Johnson had a different story. His parents were drug addicts and this ultimately led to Johnson being raised by his grandparents, and later adopted by them.

Both Wallace and Johnson attended Middlesboro High so they hoped to relate with a student in attendance. Wallace said that if any student was struggling or needed someone to talk to, she would be there to help.

K9 Officer Nicholas Capps spoke about his time at MHS and how some of his classmates fell in the path of drug addiction. He said that just because you play sports doesn’t mean you can’t become an addict and that many of his former teammates are currently addicts.

Officer Capps also gave a presentation with statistics about the effects of drugs and alcohol. He talked about how they can affect your body while driving, as well as affecting the skin, causing facial changes. He said no one really knows what is in the drugs they may be taking.

Principal Bobby Bennett told of his former classmates and how some are unrecognizable due to drug use. He then told the students about the banner that was donated by Operation Unite and the pledge they can make against drug and alcohol use. The banner will hang at the front doors inside MHS. Many students came to sign the banner and make their own pledge.

Crater of Hope will be giving another presentation on March 28 to freshman and sophomore students. The presentations are not open to the public.