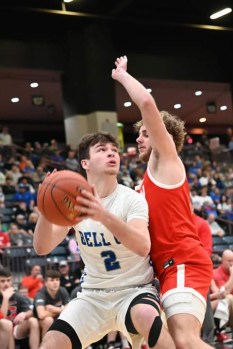 Dawson Woolum of Bell County goes up for a shot against a Corbin defender. Woolum scored 18 points as the Bobcats eliminated Corbin 57-45. - Photo by Ray Welch 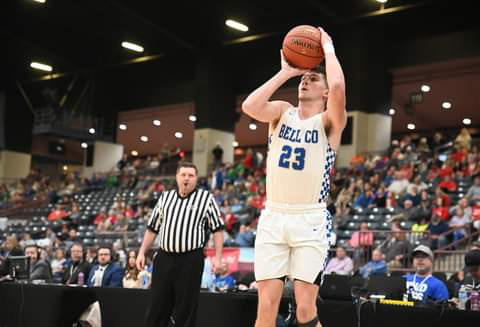 Bell County's Cameron Burnett releases a 3-point attempt in Thursday's matchup with Corbin. Burnett poured in 14 points and had nine rebounds for the Bobcats. - Photo by Ray Welch 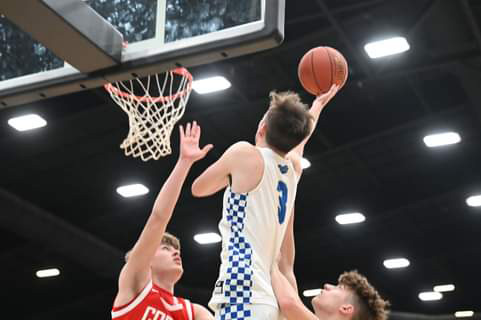 The Bell County Bobcats used an 8-0 run at the end of the third quarter on Thursday to down Corbin 57-45 in the opening round of the 13th Region Tournament at the Corbin Arena.

There were 15 lead changes during the game’s first 23 minutes.

The Redhounds took a lead early in the third quarter, but the Bobcats used a stall offense when needed to and it worked.

“Our main focus was to just stay in the game,” said Bell County coach Brad Sizemore. “Our kids haven’t been down here and we didn’t want to go into halftime with Corbin having a big lead.

“We didn’t play great early. I think it was nerves. We just wanted to get adjusted to this arena.”

“We did a super job on Woolum in the first half and pretty good in the third quarter, but we had to change some things up when we got down and it seemed we couldn’t play at the pace we had been playing and he was able to do what he does,” said Corbin coach Tony Pietrowski. “Hats off to him. He kind of took over in the fourth quarter.

“We have a nucleus of kids back, but we have to learn from this,” said Pietrowski. “I like our talent level and I like our work ethic. We have to get better in some areas. I thought we panicked a few times and lost our composure. We’re not very good when we don’t pass the ball. It’s hard with a loss with young kids, but we have to grow from this and be a better team because of it next season.”

“We wanted to be very patient and not take early shots in the possession,” added Sizemore.

Cole Hoskins came off the bench and nailed a trio of 3-pointers and the Redhounds shot 37 percent on 19-of-52 from the field. Corbin managed just one of 13 3-pointers.

The Redhounds lose two seniors — Jonathan Jackson and Trace Young. Llewelyn and Wells are juniors and the team has six sophomores.