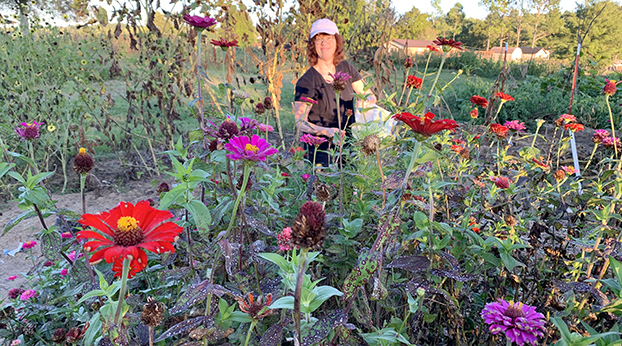 Beth Vogel of the Harrogate Garden Club stands among some of the flowers the garden club tended to. - Photo submitted by Rick Vogel 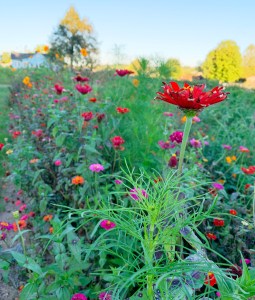 The Harrogate Garden Club will be receiving two additional awards for its community garden.

The community garden project was started in 2020. The project was awarded the 2020 Community Garden Beautification Award by the Tennessee Federation of Garden Clubs, Inc., as well as an award from the National Garden Club.

The Harrogate Garden Club is a non-profit organization. President Sue Granger said the garden club maintains the garden area near the two ‘Welcome to Harrogate’ signs, the garden space in front of the IGA Village market, and a small garden at LMU. The city of Harrogate also gave a small plot of land to plant vegetables that are distributed between club members and those in need.

“We try to plant annual plants at the IGA garden, especially because it’s out in full sun. That goes for pollinators and beneficial insects in the summer. We do that at the community garden, too,” Granger said, adding that the club only uses organic products in each of the areas it maintains.

The Tennessee Federation of Garden Clubs encouraged Granger to submit an application for the Community Garden Beautification Award.

“It’s not anything I probably would have done if I wasn’t pushed to. They want you to get awards for anything special you might be doing,” she said.

The club applied for and received the award at both the state and national levels.

“We’re very honored that we got awards for this,” Granger added.

Harrogate Garden Club member Beth Vogel said, “It just makes me feel like people realize how hard gardeners work and what good they are for the community.” She said being able to grow your own vegetables is such a satisfying feeling.

The club is always looking for new members and gardening experience is not required. 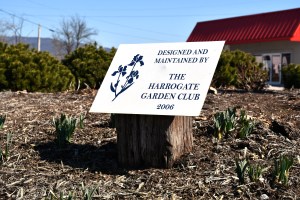 Pictured is the Harrogate Garden Club’s garden near the IGA Village in Harrogate. – Photo by Elizabeth Manning

“That’s what’s so nice about it, everybody out there has been a gardener for a big portion of their life and they can give you tips and help you establish what you need to do,” Vogel said.

The garden club meets once each month, but to maintain the garden, Vogel said the club will begin meeting two to three times a week.