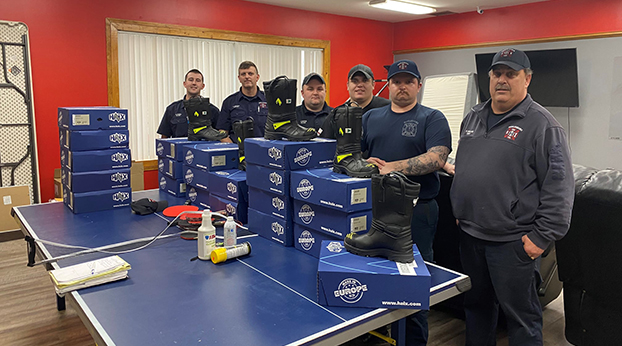 Middlesboro firefighters will soon be able to put their best foot forward in brand new boots thanks to a $10,000 personal protective equipment grant from the Kentucky State Fire Commission.

Fire Chief Robert England said the grant process took about 60-90 days then after approval, they received the boots within a week.

“All of our equipment has a 10-year shelf life, so some of my guys’ boots are one year old, some of them are 7 or 9 years old,” England said.

The department received 27 pairs of boots, which was one pair for each firefighter.

“If we go out on a fire and they get wet, water runs down in their boots and we have to turn around and go out on another one, they will have a dry pair to wear,” England added.

The new HAIX North American Fire Eagle Air boots came at no cost to the city. Each pair of boots cost $370, for a total of $9,990.

“The reputation of the HAIX, when you reach out to other departments that’s got them, they really wear good, they’re really comfortable, and they wear like an athletic shoe instead of a boot,” England said.

He said that the firefighters who have worn the boots so far are really enjoying them, but he added that it would take about six months for each firefighter to really get a good feel of them.

“Everybody got a boot that felt good to them, that fit them. Instead of just buying generic brands all the way across and getting the best one fit, we got the one that

England said the department has received many grants from the Kentucky State Fire Commission over the past few years allowing them to have state-of-the-art operations not only for the fire department but for the EMS side as well.

“I can’t say how much we appreciate the fire commission for this,” he said.