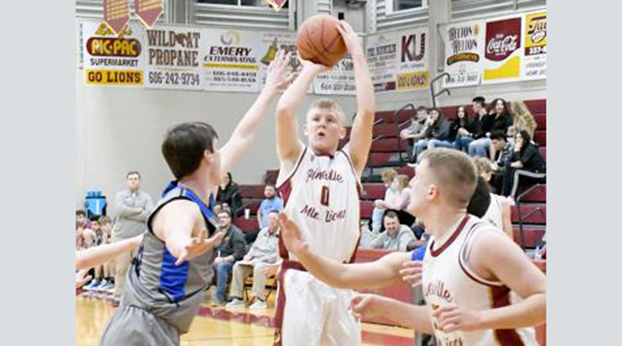 Pineville avenged a loss to J. Frank White Academy (Tenn.) in late January, but claiming a 67-44 win at home on Monday.

Freshman guard Sawyer Thompson poured in 24 points on 10 of 14 shooting from the field for the Lions.

“We’ve got a bunch of young kids that aren’t used to contact and that sort of thing. Tonight, we had four guys with four or more rebounds, a couple with six and one with seven so that show we had multiple guys going after the glass,” said Pineville coach Brad Levy.

Sawyer Thompson, in 29 games this season has scored 633 points and averages 21.8 points per game.

Mahan’s 24 lifts Whitley over PHS
The Whitley County Colonels closed the regular season with a home win over Pineville 64-59.

Pineville was led in scoring by freshman guard Sawyer Thompson with a game-high 35 points. He connected on 10 of 14 free throws.

Whitley County plays Corbin (21-7) in the opening round of the 50th District Tournament at Corbin.

No scoring information was available for Casey County.

The championship is slated for Friday at 7:30 p.m.

Tubby Smith steps away from coaching; bout with Covid…