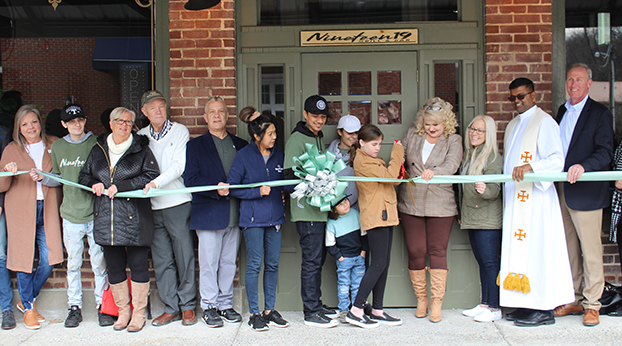 The Nineteen19 food truck is now the family-owned-and-operated Nineteen19 Grill and Bar.

Owners Edward and Bernadette Ungrue have traveled across the U.S. on business, but once they visited Cumberland Gap, they decided this was going to be their next project.

“We came to visit and we knew we were going to eventually do one more big project but we didn’t know where it was going to be, and it ended up being here because I came to visit my niece and my older brother,” said Edward Ungrue.

Edward originally grew up in the south Jersey area and traveled the U.S. working for corporate hotels. He met his wife, Bernadette, in Maui, Hawaii, and he stayed there for eight years. During that time the couple had two children, and they eventually decided to move back to the continental U.S.

Their son Jo attended a Japanese chef school where he studied sushi and various Japanese foods. Jo later married his wife, Christina, who studied at Le Cordon Bleu in California. Both Jo and Christina were chefs in Las Vegas. Jo worked at the Bellagio while Christina worked at the Wynn hotel.

The Ungrues’ daughter, Jacqui, studied hospitality management and went on to be a restaurant leader in California. While she currently resides in North Carolina, she came to Cumberland Gap to help her father open this restaurant.

Fans of their food truck need not worry. They plan to continue using the food truck after the restaurant opens.

“We will be keeping it, but until we have everything up and running here and everyone trained properly, the way it looks right now it will probably be a little while before we get back on it. But we’re not getting rid of it and we will be catering,” said Edward.

The restaurant offers sushi, tacos, and various meats from sirloin to duck. Nineteen19 chose to have a soft opening, and during the event, they received feedback from the community.

“It’s been absolutely fabulous, not only on a personal level, but on a business level as well,” Edward said.

From the renovations to the support, this restaurant has stayed local in all of the family’s hard work. They have had support from the Kotlars at the Olde Mill Inn, Tony Maxwell, Joe Wolfenbarger, the Lawson family, and from Alex Cook, Amanda Webb, and Jamie McCune at the Hearthside Bank.