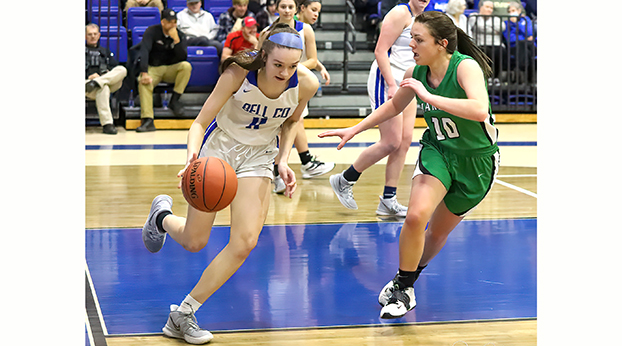 Gracie Joe Wilder of Bell County dribbles around Harlan's Peighton Jones in action earlier this season. Wilder and the 20-7 Lady Cats were on a six-game winning streak. - Photo by Jon Dickenson.

Although Bell County has been winning most of the season, the Lady Cats find themselves riding a six-game winning streak heading into the final week of the regular season.

Bell High claimed it latest win, a 60-31 victory over Rockcastle County on Saturday.

“It got us to 20 wins mark, with a week left in the season,” said Bell County coach David Teague. “We’ll keep trying to work hard and hopefully keep playing well down the stretch.”

Teague was happy to get this win.

“It was a good win for our team, to go on the road, out of region. I was pleased with our defensive effort, I thought we gave them problems with our pressure,” he added.

Johnson had eight points as Bell jumped out to a 15-9 advantage after eight minutes of play.

Wilder scored eight points in the second quarter as the Lady Cats led 33-15 at halftime.

Bell County put the game away in the third period, outscoring Rockcastle 25-6. Ausmus nailed a pair of 3-pointers in the quarter.

The Lady Rockets held a 10-2 advantage in the final period.

Teague had nothing but good to say about Rockcastle County legendary coach Chrysti Noble.

“Coach Noble does a great job and she’s one of the best coaches around. I have lots of respect for her and her program,” said Teague. “But it was a good win for us!”

Bell County (20-7) will play host to Jackson County on Tuesday and Corbin on Thursday.

Rockcastle County (9-15) will close the regular season with three games this week, beginning Monday at home against Garrard County.

The Lady Rockets will travel to South Laurel on Tuesday before hosting Russell County on Friday.

Bell downs Campbell on senior night
The Lady Cats celebrated Senior Night on Thursday and concluded it with a 50-37 victory over Campbell County (Tenn.).

Bell County fell behind 8-0 on the hot shooting by the Lady Cougars.

Teague inserted Johnson, Ausmus and Wilder into the rotation and the three combined for seven points as Bell County trailed 8-7 after one quarter.

The Lady Cats missed nine of 11 shots from the field and were three of eight at the free throw line in the opening period.

Ausmus and Wilder had 3-pointers early in the second quarter. An 11-0 run by Bell, led by Gracie Jo Wilder’s six points, gave the Lady Cats a 24-10 advantage.

Another trey by Ausmus help the Lady Cats in 6-0 spurt. Bell outscored the Lady Cougars 10-3 in a defensive battle in the third quarter.

Ausmus scored five points and Gracie Jo Wilder had a layup in the final three minutes as Bell escaped with a 13-point win.

Meyers suffered an injury late in the game and did not return.

McGeorge fired in 19 points as Bell County downed the Lady Cougars 40-28 in the junior varsity game.

Gracie Joe Wilder tossed in 14 points and Ashtyn Myers added 11 to also lead the Lady Cats to the win over the 14th Region favorites.

Bell County hit 27 of 51 from the field for 53 percent. The Lady Cats nailed six 3-pointers and hit nine of 10 free throws.

Leslie County (15-11) will close the regular season with three games this week. The Lady Eagles will visit Middlesboro on Monday, Estill County on Tuesday and Belfry on Wednesday.