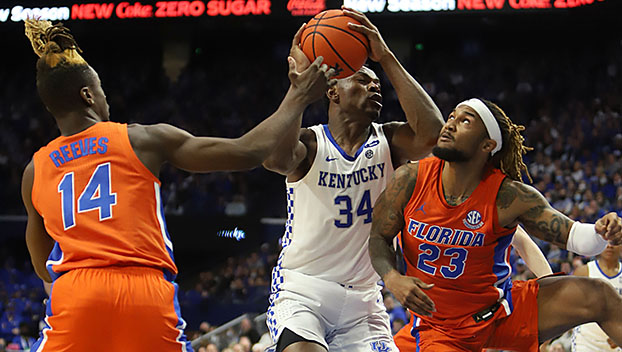 Kentucky’s Oscar Tshiebwe works inside against a pair of Florida Gators. Tshiebwe finished with 27 points and 19 rebounds in UK’s win over Florida Saturday. - Photo by Jeff Moreland 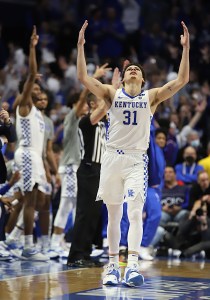 Kentucky guard Kellan Grady raises his hands in the air after sinking his fourth 3-point basket against Florida. He finished with 15 points in the win. – Photo by Jeff Moreland

Oscar Tshiebwe continues to make his case for National Player of the Year.

Tshiebwe scored 27 points and grabbed 19 rebounds as fifth-ranked Kentucky (21-4, 10-2 Southeastern Conference) remained in contention for a Southeastern Conference regular-season title with a 78-57 win over Florida Saturday to keep pace with league-leading Auburn going into the final three weeks of the regular season.

The Wildcats began an “Oscar Worthy” campaign for the Player of the Year candidate this week and he came up big for Kentucky, which won its sixth consecutive game. Tshiebwe promised a young fan he would get 20 rebounds following a visit to a Lexington school on Friday. Although he came up short, he was happy with the outcome.

“I think she’ll be more than happy (with 19 rebounds),” Tshiebwe said.

Tshiebwe’s rebounds were a big factor against the Gators. The 6-foot-9 forward came tfhrough after Florida narrowed a 20-6 deficit to 22-21 late in the first half. Tshiebwe went straight to work and scored six unanswered points, capping the spurt with a towering slam to keep the Wildcats in the lead for good.

Like many of his teammates, Tshiebwe became concerned after freshman guard TyTy Washington went down with a leg injury in the second half. Instead of falling apart, Tshiebwe said the Wildcats came together and sealed the deal.

“When something happens to any of us, we always worry (that it’s something) major,” he said. “… we stick together. We know that an injury might happen and (we could) lose our focus because somebody got hurt. We just have to stay together and finish like we did tonight.”

Thsiebwe’s ability to keep the team together and his talents on the floor are “self-explanitory” but his demeanor off the court has impressed teammates, said guard Sahvir Wheeler.

“I wish there was a person of the year,” Wheeler said. “I think that’s more telling, just Oscar as a person. I believe that’s why all of the success is coming back to him. The way he is selfless and the way he’s looking to give back and the way he takes his time to be with others who are in his circle and in his vicinity – putting a smile on someone else’s face and that comes back to you and some people call it karma.”

Tshiebwe is also enjoying getting to know Big Blue Nation and added his relationship with the fans “means a lot.”

“They care and come to support us,” he said. “I can do anything for them. I am just so grateful to see people cheering like that. 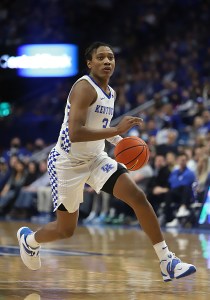 TyTy Washington Jr. scored 10 points for Kentucky before leaving the game against Florida with a lower leg injury. – Photo by Jeff Moreland

It is a blessing, so anything for them, we can do it. I am encouraging my teammates to do exactly the same thing because these people – the way they care about us, the way they follow us everywhere – I want to say it is crazy. I’ve never seen something like this in my life. I am just enjoying this moment and I am taking advantage of it.”

He also is an example for his teammates through his work ethic.

“He’s always in the gym,” Wheeler said. “He’s always looking to get better and takes constructive criticism, even when the coaches are a little harder on him. He always does it with a smile on his face. for us to see him perform the way he does, you’ve got to want him to be player of the year, the way way he’s playing and I really want him to get it for sure.”

Tshiebwe knows one day he will revisit his time at Kentucky but added “this is the time to make history.”

“You have to make history with people and make them happy — enjoy these moments,” he said. “I love our fans and I will do anything for them. I am probably going to go back there for probably another 15 to 20 minutes. I have to make sure I sign their stuff and take a picture with those little kids.”

He did just that and was one of the last players to leave Rupp Arena following yet another inspiring performance Saturday night.