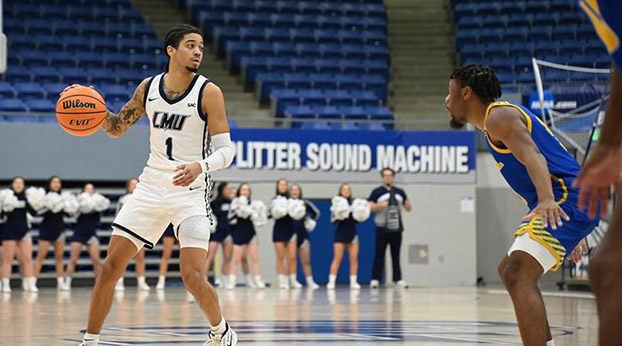 LMU’s Chase Rankin posted a triple-double in the Railsplitters’ 113-59 victory over UVA Wise on Wednesday night.

Lincoln Memorial continued to keep up the pressure on defense, forcing UVA Wise to miss attempts and commit turnovers early. The Blue and Gray offense got out to a commanding lead, but the Cavaliers’ offense started to connect on shots, but the Splitters answered each time, taking a 58-28 lead into the halftime break.

UVA Wise got things going at the beginning of the second half with two quick baskets, but Lincoln Memorial swiftly responded with a 9-0 run to further increase their lead. The Railsplitters continued to keep their lead at the current pace as they shot 62.5 percent in the second half en route to a 113-59 win over UVA Wise.

Lincoln Memorial was paced by Jordan Walters who finished the night shooting 13-of-15 from the field, tallying a career-high 29 points. The West Lafayette, Indiana native also added eight rebounds to his line. Freshman Matthew Sells had another stellar night as the Rickman, Tennessee native broke out for 21 points on 7-of-12 shooting and added three rebounds and four assists.

Redshirt sophomore Chase Rankin continues to prove the Railsplitter legacy as the Columbus, Ohio native recorded his second-career triple-double with 17 points, 10 rebounds and 10 assists. This also marks the first time in program history that a Railsplitter has recorded two or more triple-doubles in a single season.

Up Next
The Railsplitters will make the return trip to the Wolves of Newberry when they travel south to South Carolina for a 4 p.m. ET tip-off.