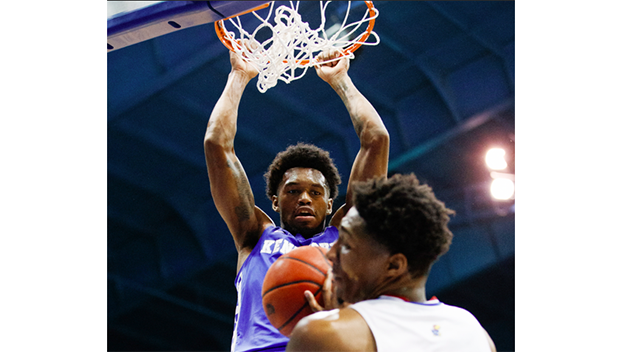 LAWRENCE, Kansas (KT) — Keion Brooks sipped on a Gatorade before Kentucky’s showdown against Kansas in the Big 12-SEC Challenge Saturday night. He was drenched with the popular thirst quencher following the Wildcats’ dominating performance against the Jayhawks.

Brooks scored a career-high 27 points and just missed a double-double with nine rebounds to lead Kentucky to a dominating 80-62 win, handing the hosts their first loss in historic Allen Fieldhouse this season. The outing by Brooks gave the Wildcats their most impressive road win of the year, following close calls at Notre Dame and Auburn this season.

“I just felt good tonight,” Brooks said. “I started the game off with a tip-dunk and that let me know that I was going to be into it and I just kept playing hard throughout the whole game. My teammates did a great job of hitting me in my spots and I made shots.”

Kentucky coach John Calipari wasn’t surprised by Brooks’ performance and said his outing in a win over Mississippi State last Tuesday night was an indictor of things to come. Brooks scored 12 points against the Bulldogs, his first double-figure game in two weeks.

Although he carried most of the load, Keion Brooks got some help from his teammates, including forward Oscar Tshiebwe, who scored 17 points and grabbed 14 rebounds. Kellan Grady added 12 points and Jacob Toppin scored 11 off the bench. The return of guard TyTy Washington from an undisclosed injury also provided a boost for the Wildcats, although Washington managed just two points. The freshman dished out five assists and collected three steals in the dominating outing.

“He helped us to win this game,” Tshiebwe said of Brooks. “He came out tonight and was unbelievable. I’m so proud of him. I want him to keep coming like that every night. That’s how we’re going to be a tough team when everybody steps up like that. I’m proud of him.”

The Jayhawks had most of their attention on Tshiebwe, which opened the door for the breakthrough performance by Brooks.

“They (forgot) about him,” Tshiebwe said.

Kentucky trailed just once shot a blistering 62 percent from the field in the first half and built a 51-31 lead at the break. In an effort to disrupt Kentucky’s steady offensive flow, Kansas coach Bill Self threw a 2-3 zone and other mixed defenses at the Wildcats, but it was Brooks who calmed the stormy waters.

In what may have been a first in his collegiate career, Brooks scored 15 straight points that enabled the Wildcats to stay in control and avoid a late collapse similar to the team’s four setbacks this season.

“We were dying,” Calipari said. “They went triangle and two and then they went 2-3. We were struggling. Keion made basket, made basket and free throw, free throw. …”

Praising the team’s ability to remain poised down the stretch, Brooks said the team’s main focus was to produce a signature victory on the road.

“We’ve been (in) some very tough environments against some ranked opponents in the road and we didn’t come out with a win,” Brooks said. “We did get it done and we knew we had an opportunity tonight, getting everybody back healthy and playing a really good team that is coached really, really well. We wanted to see how good we were and we went in and made a statement.”

That statement will serve as a notice to other teams for the remainder of the season that a healthy Kentucky will be a team to reckon with going into the final stretch of the regular season.