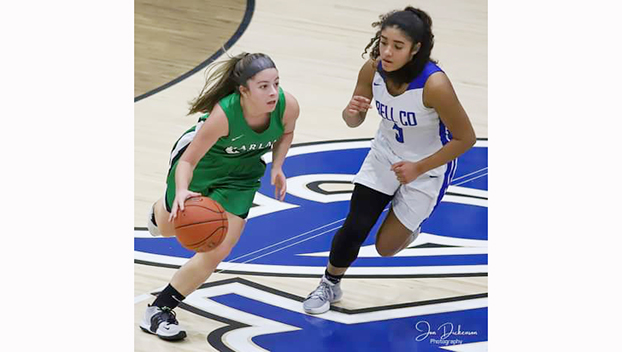 Harlan's Emma Owens dribbled the basketball around Nadine Johnson of Bell County in Tuesday's district battle. Johnson scored 17 as the Lady Cats rolled to a 77-45 victory. - Photo by Jon Dickenson

Bell improved to 14-6 overall and 4-0 in district action.

Harlan turned the ball over six times in the opening quarter and had 10 more in the second as Bell’s lead grew to 46-19 at halftime. Johnson and Wilder teamed for several baskets to lead the Bell offense.

Wilder hit all four of her shots in the third quarter, including a 3-pointer with four minutes left in the period to extend the lead to 60-24 and start a running clock. Wynn hit a pair of 3-pointers as

Harlan cut the deficit to 67-36 going into the final period.

Bell County travels to South Laurel on Thursday. Harlan is scheduled to play host to Middlesboro on Friday in the first game of a girls/boys doubleheader.

Hall wanted players to be role models for fans