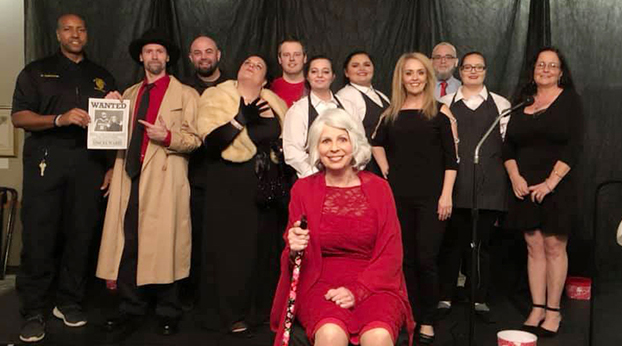 Middlesborough Little Theater will be holding open auditions for its annual Valentine’s Murder Mystery Dinner. Auditions will be Jan. 17 and 28 at 6:30 p.m. at Southeast Kentucky Community and Technical College in Middlesboro. Auditions are open to the public.

Middlesborough Little Theater will be holding open auditions for its annual Valentine’s Murder Mystery Dinner. Auditions will be Jan. 17 and 28 at 6:30 p.m. at Southeast Kentucky Community and Technical College in Middlesboro. Auditions are open to the public.

Amy Simpson, director of MLT, said, “There is no age limit, anyone can audition. Some of our plays are rated PG at worst, so more adults audition than children.”

No prior acting experience is needed to audition. Simpson said that some of the best performances came from people who had never auditioned before. Simpson and assistant director Jessie Surber write the scripts themselves.

“It is easier for us to make adjustments to the script because we don’t have to worry about copyright. If an actor is struggling with a line, we can adjust it to suit them,” Simpson said. She added that she had a woman a few years ago that wanted to participate, but did not want to speak. Due to them writing their own scripts, Simpson was able to create a character for this woman.

MLT is looking to fill seven roles: two men, three women and four additional roles that are not gender-specific. The cast will rehearse three to four nights a week due to the event coming up so fast.

“Almost all cast members of prior murder mysteries say this is the least-stressful and most fun of all the events. It’s a comedy, so there’s not as much pressure,” Simpson said, adding that more women show up than men, and those auditioning are of all ages. She’s had people in their 70s come wanting to participate.

Middlesborough Little Theatre was founded in 1947. It has been affiliated with Southeast Kentucky Community and Technical College for the past 25 years.

“We want to provide a place for people with theater and artists talents to use their talents to celebrate the arts of the community. It’s a way for the community to come together that is uplifting, moving, and rewarding,” Simpson said.

The Valentine’s Murder Mystery Dinner will be held on Saturday, Feb. 12 at Pine Mt. State Park. All of the proceeds will go towards the MLT scholarship fund.