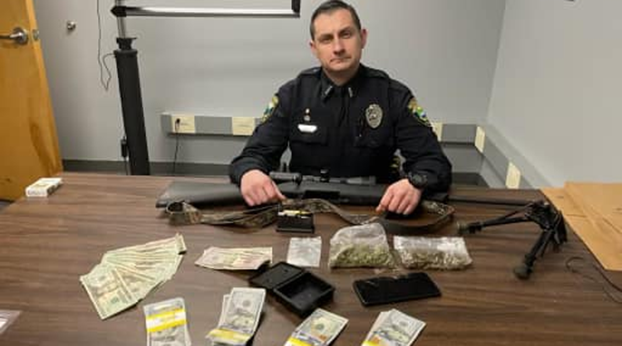 A Speedwell, Tennessee, man is facing charges including drug trafficking after allegedly being found in possession of methamphetamine and other items during a traffic stop.

According to a press release, Harris observed a Chevrolet Tahoe traveling in US 25E heading south at approximately 12:20 a.m. on Sunday. The Tahoe’s lights were off. A traffic stop was performed, stopping the Tahoe near the National Park entrance. Harris and Middlesboro City Police K-9 Officer Nick Capps performed an investigation, and located suspected methamphetamine, suspected marijuana, a hunting rifle, cellphone, and a large amount of cash. The items were seized by the Middlesboro City Police Department.

Horton was charged with first-degree trafficking a controlled substance (methamphetamine) and trafficking in marijuana (less than 8 ounces). Horton was lodged in the Bell County Detention Center on a $3,000 cash bond.

In other police activity:
• Denver Lingar, 44, of Arjay, was arrested on Sunday. He was charged with first-degree possession of a controlled substance (methamphetamine) and probation violation. Lingar was lodged in the Bell County Detention Center on a $1,500 cash bond;

• Victor Partin, 18, of Middlesboro, was arrested on Sunday by Middlesboro City Police Officer Jeremiah Johnson. He was charged with tampering with physical evidence, second-degree disorderly conduct, discharge of a firearm/other device across public road, alcohol intoxication in a public place, possession of marijuana, third-degree assault on a police or probation officer (three counts), menacing and resisting arrest. Partin was lodged in the Bell County Detention Center;

• Randall Murray, 34, of Middlesboro, was arrested by Middlesboro City Police on Friday. He was charged with first-degree possession of a controlled substance (methamphetamine). He was additionally served with multiple bench warrants. Murrey was lodged in the Bell County Detention Center on a $1,500 cash bond.