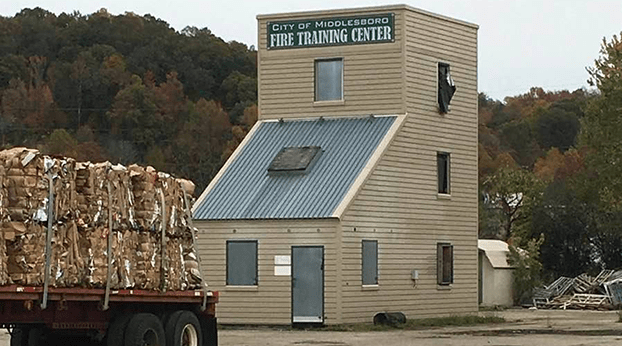 The city of Middlesboro has been awarded a grant in the amount of $69,000 earmarked for improvements to the Middlesboro City Fire Department’s training facilities.

“We’ve got a training center that we helped get money for about 15 years ago,” Nelson said. “A training center is a two- or three-story building that the firefighters actually go into for training. They fill it full of smoke, it’s an excellent training device.”

Nelson said the training facility will be used by firefighters of all experience levels.

“That building has been sitting on a recycling area,” Nelson said. “As the recycling area has expanded, it has been more difficult for that to be a functional building.”

Nelson shed some light on the plans the city has for the training facility.

“Our plan is to move it right across from the Middlesboro Street Department to a good plot of land we have,” Nelson said. “Our fire chief was able to get us a grant for $69,000 which will pay for moving the building, a concrete pad, and we’re also going to put some offices there.”

Nelson said the Middlesboro City Fire Department may not be the only department to benefit from the improved facility.

“We’ll be able to open it up to any fire department that wants to come and use that facility,” Nelson said.

Once the facility is moved to the new location, there will still be some work to be done.

“We’re going to fence it, and next year we’ll have to pay for the blacktop around it, which is no problem,” Nelson said. “It will be a first class, state of the art, easily accessible building. We’re excited about it, and we’re working on it now. I think it will be a big asset to our fire department.”

The new location will be across the street from the current location.

“They’re working on it now, building up the base and they’ll be doing footers pretty soon,” Nelson said. “Then, we’ll have a professional house mover that will pick the building up, bring it across the road and set it down, secure it, and there it will be.”