Tornado death total stays at 74; Victims range in age from 2 months to 98 years 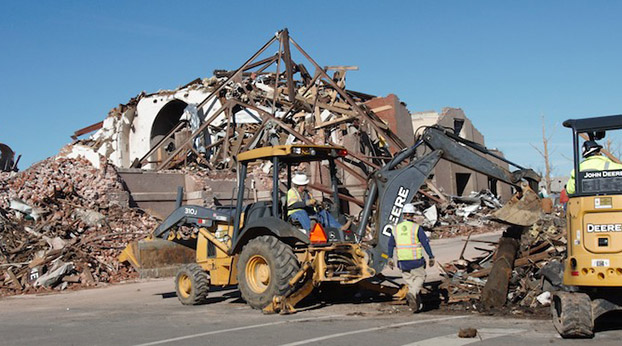 Crews work to clear debris at the intersection of 9th Street and Broadway in Mayfield. - Photo by Berry Craig 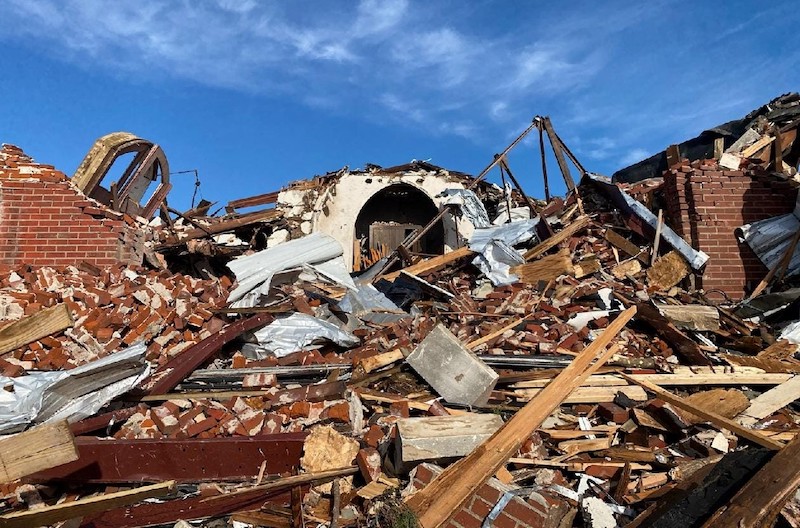 First Presbyterian Church in Mayfield was destroyed by the tornado that hit Mayfield Saturday morning. – Photo by Berry Craig

FRANKFORT, Ky. (KT) – Gov. Andy Beshear said the number of confirmed deaths from the weekend tornadoes and other severe weather in Kentucky remained at 74 during a Tuesday afternoon briefing at the state Capitol, with more than 100 still missing.
Breaking down the deaths by county, he reported 21 in Graves County, including 8 at the candle factory; 17 in Hopkins County; 15 in Warren; 11 in Muhlenberg; four in Caldwell; two in Marshall; and one apiece in Franklin, Fulton, Lyon, and Taylor counties. 12 of them were children.

The victims range in age from two months to 98 years old. Eight of them are either unidentified or their names have not been released.

Beshear said debris removal is in high gear in the affected areas. “It feels pretty good that we’re not just pushing this stuff out of the way but are loading it up and taking it out of town. There is something therapeutic about taking that chaos of destruction and death and getting it out from some of those areas.”

With thousands of homes damaged or destroyed, the governor said state parks are providing shelter in their cottages and lodges for at least two weeks. “On Monday night, we provided 152 rooms for displaced residents, and 67 additional rooms for first responders.

Kentucky Emergency Management Director Michael Dossett, who had announced earlier this month that he would be retiring at the end of the year, said those plans are on hold.

“I’ll be very frank with you. During my entire career, I have been with teams who always run to the fight. We are in it to win this one, so I am staying until we reach ‘steady state.’”

When asked to define steady state, Dossett responded, “Steady state can mean 30 days to whenever. I will tell you I will remain here until I am comfortable to brief the Governor that we are in good standing, that all of our programs are vibrant and staffed well, and our federal partners are here to stay.”

He added, “My wife was the first one that knew and told me that I was not leaving. We came to that conclusion very quickly.”

There has not yet been a response to Governor Beshear’s request to expand the major disaster declaration area beyond the original eight counties, so residents of Caldwell, Fulton, Graves, Hopkins, Marshall, Muhlenberg, Taylor, and Warren counties, may apply for FEMA disaster assistance.

They can begin the process online at disasterassistance.gov, by calling 800-621-3362, or by using the FEMA mobile app.